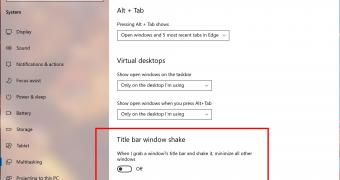 Aero Shake is a feature that landed in Windows 7 as part of the Aero tweaks that everybody loved and is one of the few remnants still available in Windows 10.

In other words, Aero Shake is still there in Windows 10 even if Windows 7 has already been removed, and without a doubt, users making the switch from the old to the new OS love this.

But as it turns out, Aero Shake isn’t everybody’s cup of tea, so Microsoft has decided to disable it by default in Windows 10. The good news is the feature isn’t being removed, so for now, it’s only turned off and everybody would just have to manually re-enable it.

Aero Shake’s purpose is as simple as it could be. Users only need to shake a window by clicking its title bar and dragging it around the screen to minimize all the other windows. Needless to say, many of us use this on a regular basis and it’s a neat touch in an operating system that’s otherwise supposed to feel as modern as possible.

Off by default
… (read more)

After Xbox testimony, Apple tells Microsoft to put up or shut up

The Longing is deliberately slow and tedious, but I can’t stop playing