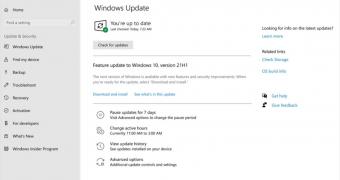 Windows 10 21H1 is projected to go live at some point in the spring, so Microsoft is now giving its finishing touches ahead of the highly anticipated launch for production devices.

Earlier this week, the company confirmed that Windows 10 21H1 is now available for commercial pre-release validation, which means commercial customers can inspect the operating system and conduct feature exploration and validation in advance.

This new feature update isn’t a major release, but commercial partners still need to make sure everything is working as expected on their devices.

“Do you want to see how quickly devices update from version 2004 or 20H2 to version 21H1, and how little downtime is involved? Now you can!” Microsoft explains.

“You can access Windows 10, version 21H1 through all standard channels, including Windows Update,… (read more)