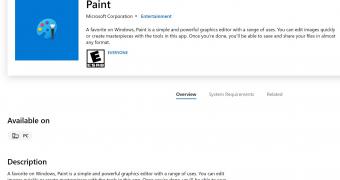 Microsoft has brought the Paint app to the Microsoft Store, so soon enough, users would be able to get it just like any other application for Windows 10.

The software giant has announced that Paint would make its way to the Microsoft Store a long time ago, but the company hasn’t shared any new specifics in this regard, so today’s news certainly comes as a little surprise.

But as pointed out by AL, Paint isn’t yet available for download from the Store, though given the listing is already live, it shouldn’t take too long before the download links are up and running.

The Windows 10 Creators Update introduced the new-generation Paint replacement called Paint 3D, with Microsoft rolling it out as a major overhaul that would specifically push the traditional solution to a completely new level.