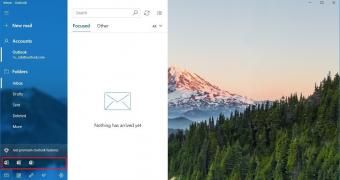 The Mail app in Windows started as a pretty exciting project, but it was slowly converted into the kind of client that few people would use.

And it’s not only because of the lack of features and its overall stability and reliability, because the Mail app needs serious improvements in this regard, but due to the ads that have been introduced a long time ago and which have reportedly been refreshed with the addition of links to Office on the Web.

In theory, you wouldn’t necessarily expect a Microsoft app to have ads, but in practice, the Redmond-based software giant is using the Mail app to link to some of its other products, including Outlook mobile.

In fact, the addition of the banner to the mobile version of Outlook is one of the decisions that haven’t been very well received by the userbase out there, and yet, Microsoft eventually went for it anyway.