KB5001396 is an optional update designed for those with Windows 10 version 1909. Since it’s an optional update, it won’t be downloaded and installed automatically unless you click on the install button. Plus, if you decide to skip the patch, you’ll get the same set of bug fixes in the next month’s Patch Tuesday.

For those on Windows 10 version 20H2 or version 20H2, you’ll be getting a different update with the same set of bug fixes. If you’re on version 1909, check for updates on the Windows Update page will surface the following package:

Once done, your device will reboot for one time and a cumulative preview update will be applied to the system. If you run into installations issues or other problems, simply retry the installation by manually downloading the offline installer from the Microsoft Update Catalog page linked below.

For the past few months, Microsoft has been testing a new feature named “News and Interests” that will show news stories, weather information and personalized suggestions on Windows 10 taskbar.

After the update, a new icon will appear on your taskbar. You can click on it to access the feed. Of course, news, weather and everything else can be personalized, which means you can follow or block publishers and topics. 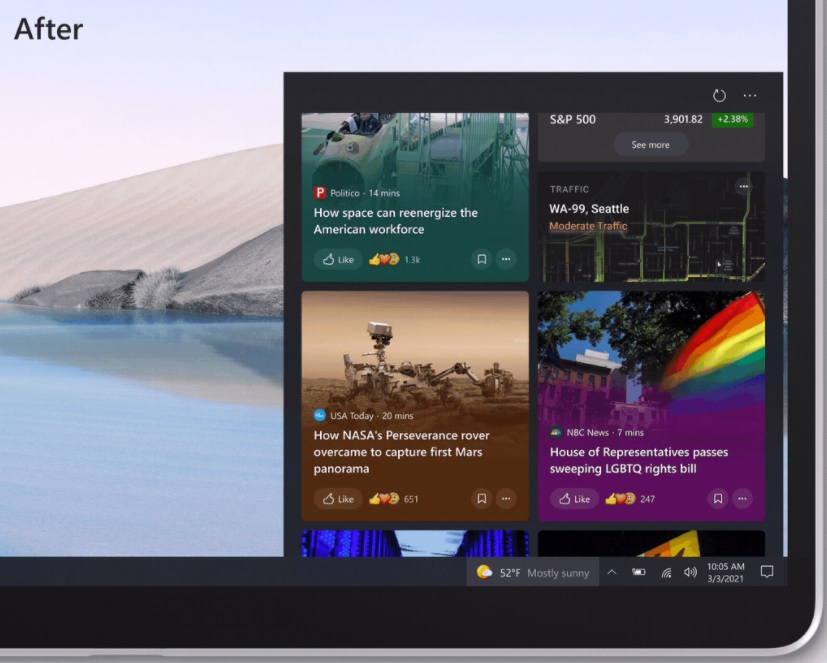 In our tests, we observed that this feature is part of Windows Shell Experience, which means it cannot be rolled out to users via a server-side update. It also means that it cannot be removed from the system completely.

Of course, this feature is optional and users can hide it, but it can’t be uninstalled.

Currently, Microsoft is planning to use its news network to offer relevent stories from global news brands, such as CNN and FoxNews. Microsoft will also use its AI and ML expertise to automatically customize your feed, but users can always dismiss a story by clicking on the three dots menu.

In order to use News and Interests feed, users must meet the following requirements:

I’ve been using the News and Interests feature in the Insider builds for nearly two months the time you’re reading this, and I can say that it works as advertised.

In addition to the taskbar feed, Windows 10 Build 18363.1533 also comes with general performance and quality improvements. For example, Microsoft has added a new option that will help you configure the idle time before a headset goes to sleep.

It’s also worth noting that this would be the last optional patch as Windows 10 version 1909 is reaching the end-of-servicing period in the second week of May.