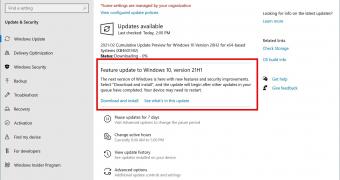 Microsoft has recently announced that Windows 10 21H1 is now a recommended update for all insiders in the Beta channel, as the development of this new OS feature update continues.

Previously, Windows 10 21H1 build 19043.844 (which landed as cumulative update KB4601382), was available for seekers, meaning that users had to manually go to Windows Update and look for updates.

Stable version due in April or May

Windows 10 21H1 will be offered as a monthly cumulative update and will be another small release, with Microsoft explaining that it’s focusing on refining the experience with certain features already bundled with the operating system.

“Based on feedback and learnings during the past year of extensive remote work, learning and play, version 21H1 will be delivered with servicing technology (like that used for the… (read more)