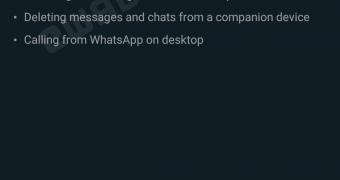 We’ve known for a while that WhatsApp was planning to bring multi-device support to its service, and now it looks like the work in this regard advances fast.

First of all, what’s the multi-device support and how does it work?

Theoretically, with this new feature, WhatsApp would allow users to enable the messaging app on more than one device using just a phone number. In other words, WhatsApp can be active on more devices at the same time, even though theoretically, only one phone number is being used.

This is similar to how the whole thing works on Telegram, which can also be enabled on multiple devices and even on the desktop.

And it looks like WhatsApp uses its rival’s idea as a way to improve the service, as the company wants to bring such capabilities to its web interface.

32 mins ago
wpDiscuz
Share this Article
Email sent!
We use cookies to ensure that we give you the best experience on our website. If you continue to use this site we will assume that you are happy with it.OkNo