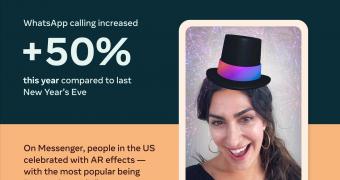 WhatsApp is one of the applications whose adoption increased during 2020 due to social distancing and people needing an efficient way to communicate even from the safety of their own homes, and the Facebook-owned company says a new record was set on New Year’s Eve.

No less than 1.4 billion voice and video calls were made on WhatsApp on New Year’s Eve globally, the company says, and this is an increase of no less than 50 percent versus the same period a year before when everything in the world was still normal.

People celebrating from the safety of their homes