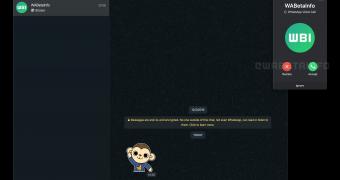 The adoption of software allowing voice and video calls has skyrocketed lately for pretty obvious reasons, and WhatsApp obviously wants to be part of this trend too.

And while voice and video call support was already available in the mobile versions of WhatsApp, the Facebook-owned company is now working on bringing the same capabilities to the desktop.

In other words, WhatsApp wants users to be able to call their contacts using nothing but their computers, and this will be possible with WhatsApp Web or the official desktop clients.

As reported by WABetaInfo, this feature is currently being tested with a limited number of users, and by the looks of things, the company uses a gradual rollout across the world.

Rolling out in the coming weeks to everybody

Both the phone and the video call buttons in WhatsApp Web and desktop come with a beta label, so WhatsApp… (read more)

14 hours ago
wpDiscuz
Share this Article
Email sent!
We use cookies to ensure that we give you the best experience on our website. If you continue to use this site we will assume that you are happy with it.OkNo