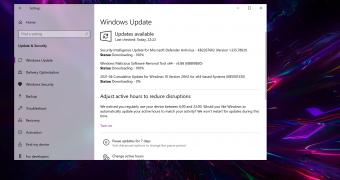 Microsoft has released new cumulative updates for Windows 10 day, and of course, version 2004 and 20H2 have received their very own pack of improvements.

Windows 10 version 2004 and 20H2 share the same cumulative update, with the latter representing the most stable version of the operating system.

The cumulative update aimed at the two versions is KB5001330, and in addition to the typical security updates for Windows 10 and the built-in components, it comes with three important fixes.

First and foremost, it resolves a potential elevation of privilege hitting Azure Active Directory, and then, it includes fixes for recently discovered security bugs related to RemoteFX vGPU.

Microsoft explains that because of all these vulnerabilities, future Windows updates will no longer include this feature, as other secure vGPU options are available, including DDA in Windows Server LTSC releases.

The last fix concerns a problem that was ori… (read more)