There was a fire near the Capitol on Monday. The smoke came from inside Washington’s “Green Zone,” or the especially secure area patrolled by the National Guard, put in place to ensure that Wednesday’s inauguration does not face the same violence as Congress saw with vote certification on January 6.

With the fire in the Green Zone came a brief panic. Did the dark clouds herald a second assault on the Capitol in as many weeks? To the relief of breathless news anchors, in a panic about fears of bombs and gunmen, the fire had a far more mundane explanation. A homeless woman, trying to keep warm in winter, was using a portable heater. Its fires spread, consuming her possessions and burning her, but she declined a trip to the hospital.

That small news, of a national failing so durable and familiar it feels like background, comes 12 paragraphs deep into this WTOP story. Before that, we are treated to the theater and security of spectacle, of the great lengths to which the national security state, having largely failed on January 6, promises to make sure that the ceremony of democracy continues smoothly on January 20th.

What makes a fire at an encampment different on January 18, 2021 than it would have been on, say, January 18, 2020 is that a large chunk of the District is now surrounded and fortified in a kind of Green Zone. With the influx of 20,000 National Guards to the Capitol, the city is now more than ready to repel the last assault, if only its forces could be deployed back in time to do so.

“Green Zone” is Pentagon jargon made real. It’s a euphemism for safety and security within a tightly patrolled perimeter, a term whose very use masks the violence that calls it into being. There are no Green Zones in peacetime.

“Green Zone” entered the popular vocabulary of Americans following the 2003 invasion of Iraq. Thanks largely to the destabilizing nature of invasion, a galaxy-brained overestimation of how smooth things would be, and especially an ill-conceived political purge in a formerly one-party state that barred its entire government and military workforce from holding jobs, the US summoned an insurgency into being.

To govern in insurgency, the U.S. carved a little fortified retreat into the center of the nation it had sent into chaos. Surrounded by tall concrete walls, Iraq’s Green Zone was full of amenities for its highly transitional residents, almost all of them from the United States or allied nations. These residents worked in the offices of the Coalition Provisional Authority, the government imposed upon post-Saddam Iraq. The relative calm enjoyed inside the Iraq Green Zone was only possible because of the violence done by the U.S. outside of it.

And even then, that calm came up short. While there are only 1/8th as many American troops in Iraq as DC right now, rocket attacks persist, 17 years after the Green Zone’s creation. The U.S. Embassy, still inside the Green Zone in Baghdad, was hit with rockets on December 20, 2020. 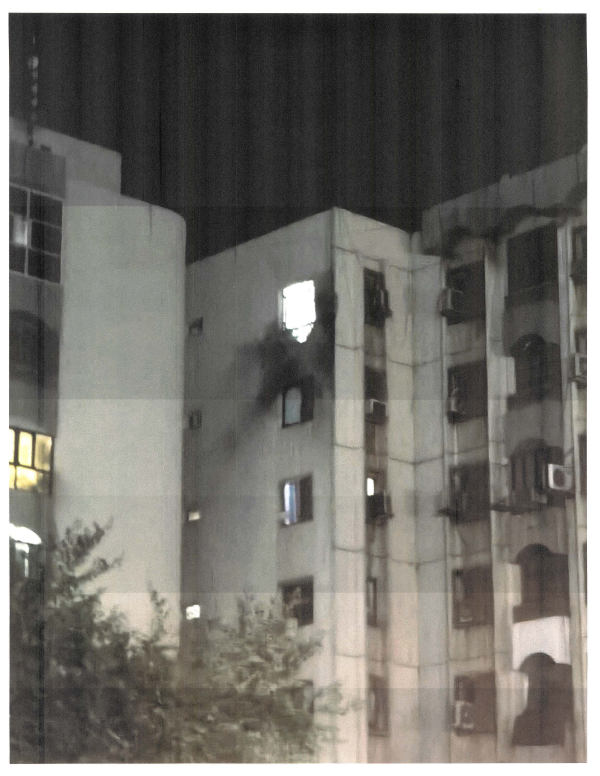 While the U.S. is awash in small arms, rocket attacks remain an extremely distant possibility. And, before I continue with this, I should say explicitly that the Green Zone imposed in Iraq meant not just Americans with guns and lethal authority, but it also meant checkpoints Iraqis had to navigate without the occupiers speaking their language. At a minimum, internal security forces almost always have the benefit of language and deescalation, should they choose to pursue it.

What we gain from thinking about 2021 Inauguration DC as a Green Zone is a sense of solidarity across occupations, even as the degrees of violence and imposition through force vary. President Trump, more explicitly than virtually every one of his predecessors, saw little distinction between enemies foreign or domestic, and sought to do what violence he could to his enemies where he found them.

“Trump’s domestic politics are the same as his foreign policy, turned inward: the failure of the state was that it was insufficiently violent against its enemies,” I wrote in Hell World the week of the Capitol assault. “Make America Great Again was a call for a new baptism in blood, and specifically the blood of people in the United States who did not subscribe to the same specific strain of nationalism that Trump ingested on Fox News and then found throughout the entire voting base of the Republican Party.”

I think that this war nationalism, pointed inwards as well as out, is essential to understanding the present. That war nationalism persists, even as the wars that animated it barely capture public imagination.

As I was drafting this, I received a press release from the symbolic heart of the forever war.

“Explosions reported earlier today about 40 miles outside of Baghdad, Iraq, in the town of Jurf Sakhar were not the result of U.S. military action,” said captain Bill Urban, the spokesperson for U.S. Central Command. (Central Command is the part of the Pentagon that oversees all wars in the Middle East, its slice of the globe.)

Like the fire at the encampment, the existence of tragedy in the presence of the military suggests an immediate causal explanation to all observers, regardless of what actually happened. In the absence of other sources, those in the profession of violence craft their own narratives, and share them where they can.

The indefinite continuation of the Forever War creates a perverse praetorianism, one that sees the wars as not yet won because of constraints on violence. This praetorianism comes home and joins police forces, whose officers then underestimate publicly posted threats to assassinate members of Congress, while simultaneously sharing memes about how weird-tasting milkshakes are the work of dedicated antifascists. 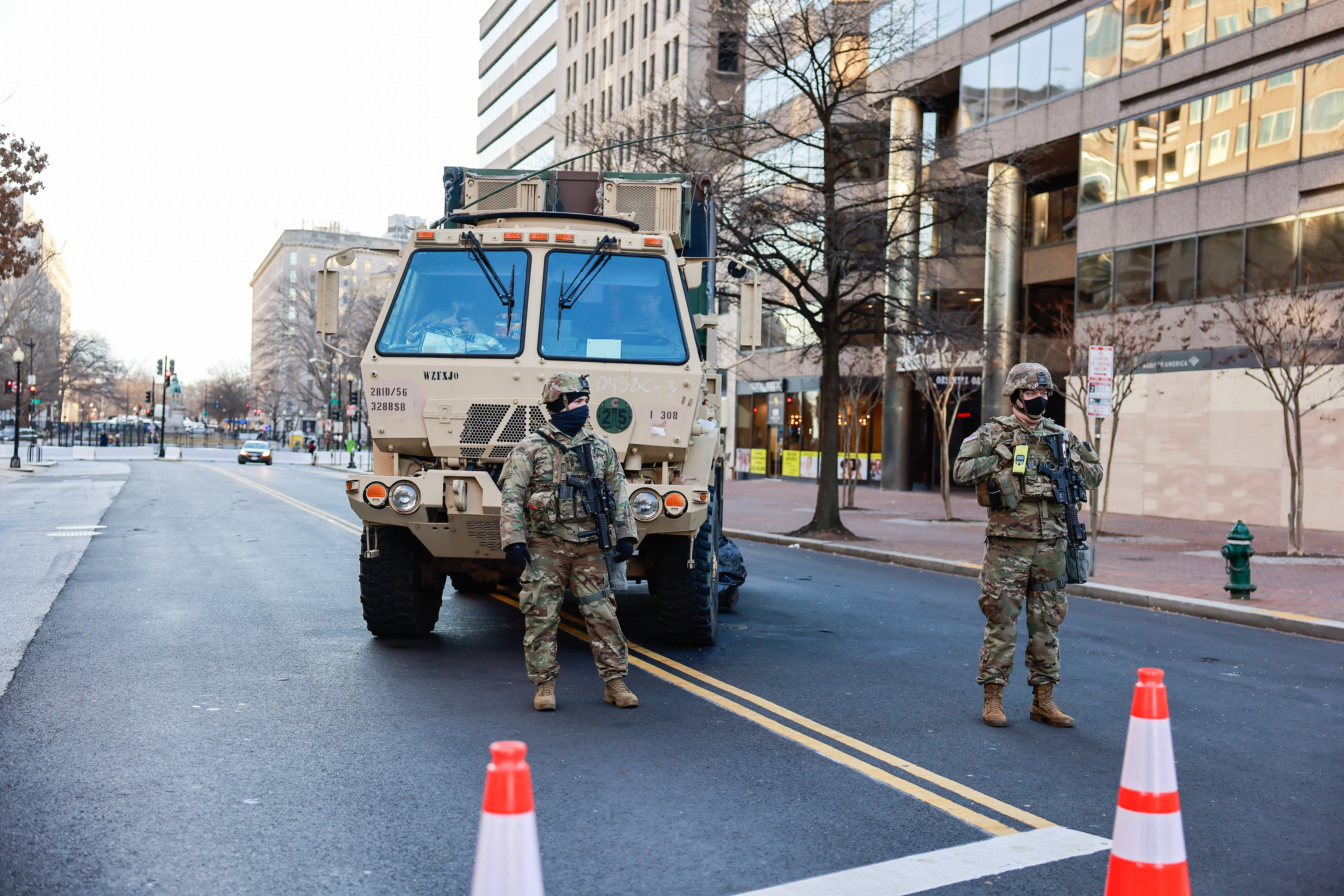 National Guard troops guard a street leading to the White House two days before president elect is to be inaugurated. Washington D.C. is on lockdown after rioters stormed the United States Capitol building because Donald J. Trump falsely insists he won the election despite evidence to the contrary. Image: Jeremy Hogan/SOPA Images/LightRocket via Getty Images

Relying on police to solve the problem of violence like January 6 places a tremendous amount of faith in police, hardly apolitical actors, taking the threat seriously. Giving police new powers to pursue domestic terrorism overlooks the vastly expanded set of police powers since 9/11, and it misses how police are already leaning on surveillance platforms, like war-surplus drones and helicopters, to record and track events like Black Lives Matter protests.

With tools like this on call, how did the security of DC fail so utterly that the Capitol was breached?

“Fears that street clashes might provoke Trump to invoke the Insurrection Act or federalize the MPD further encouraged an attitude of waiting out far-right street politics,” Trombly continues. “Neither D.C. officials nor USCP expected or prepared for the Capitol to be stormed, and encouragement and assistance within the Hill may have exacerbated this problem. The solution for the inauguration, an influx of tens of thousands of National Guard and federal law enforcement personnel and stifling security measures, are unsustainable, and the creation of a new domestic War on Terror is dangerous.”

The United States has spent the last 19+ years living inside the paranoid logic of a forever war, convinced enemies are everywhere, building Green Zones where it can, and doing violence to secure them.

What matters most for the people of Washington in the aftermath of the inauguration is that the fortress comes down.

More should happen, too. The people of DC deserve statehood, like that of all people residing in U.S. territories, and while it’s unlikely that an expansion of democracy within the country will dissuade violence from the kind of people who take private jets to try and overthrow an election, a U.S. that is more democratic will effectively bar from office the kinds of leaders who insist on winning by restricting the franchise.

Dismantling the Capitol Hill Green Zone is a first step to dismantling the antidemocratic strains within the United States that it was a reaction against. But it cannot be fully dismantled without a move away from the Forever War.

The inauguration will take place in a Washington fortified against violence, where the fortunate huddle indoors against disease and those let down by society lose all their possessions to fire while struggling to keep warm outdoors, their personal tragedy only news when it is mistaken for violence.

Inside that hollowed fortress Washington, Joe Biden will become the third president to inherit the Forever War. May he be the last to do so.

This essay originally appeared as a newsletter at Wars of Future Past, a newsletter by defense technology journalist Kelsey D. Atherton.