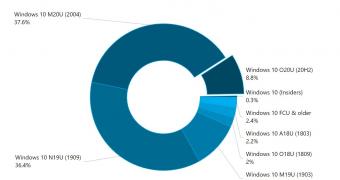 Microsoft has recently released Windows 10 October 2020 Update, or version 20H2, and this particular update seems to be gaining ground quite fast, according to new data.

AdDuplex claims Windows 10 October 2020 Update is already running on 8.8 percent of the Windows 10 devices out there, which makes it the third most-used version of the operating system currently out there.

Windows 10 May 2020 Update continues to be the leading version out there with a share of 37.6 percent, while the runner-up is the November 2019 Update with 36.4 percent.

The Windows Insider program is also running well, with 0.3 percent of all devices currently on preview builds that are shipped as part of the Dev, Beta, and Release Preview channels.

What’s next for Windows 10?

With version 20H2 already live, Microsoft can now focus on what’s next for Windows 10, and according to sources familiar with the company’s plans, … (read more)

Classic video game fans will love this Pac-Man: Birth of an Icon book

24 mins ago
wpDiscuz
Share this Article
Email sent!
We use cookies to ensure that we give you the best experience on our website. If you continue to use this site we will assume that you are happy with it.OkNo