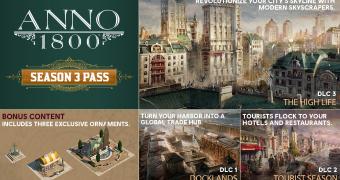 Anno 1800 has been pretty successful for Ubisoft, to the point that the French giant allowed its developer to pump up DLCs for the game like there’s no tomorrow. Earlier this week, Ubisoft announced that Anno 1800 will be getting three new DLCs in 2021.

The three DLCs – “Docklands”, “Tourist Season”, and “The High Life”, will be bundled in Season 3 Pass along with 3 exclusive ornaments. The names of the DLCs are kind of self-explanatory in case you’re wondering what they’re all about. So, expect to be invited to discover harbor trades, tourism, and manage big city-building heights. Players will experience a new way of exporting and promoting their cities thanks to the modular warehouse district, tour busses, and skyscrapers.

The first of the three DLCs, “Docklands” is set to land on February 23. It will allow players to transform their city by building a modular warehouse district, starting with the main building, which is inspired by the world-famous “Speicherstad… (read more)