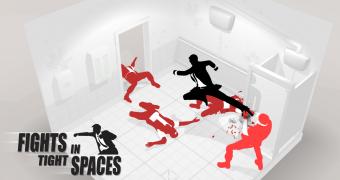 Games like Superhot and John Wick: Hex popularized a niche genre – bullet-time shooters. Fights in Tight Spaces offers similar gameplay, but with a twist. This is a turn-based deck builder that focuses on tactical fighting.

The game has been on consoles via Xbox Game Preview since last November, and it will eventually be released on Xbox One, as well as an optimized version for Xbox Series X/S. As far as PC goes, we’ve just learned that Fights in Tight Spaces will enter Early Access on February 24. Apart from Steam, players will be able to pick this one up from the Epic Games Store and GOG, so that’s another good thing.

First and foremost, Fights in Tight Spaces is a deck-building tactical game with turn-based combat and animated fight sequences. The catch is to learn how to balance the cards that you have in your hand, momentum, and positioning, otherwise, the game will seem unfair.