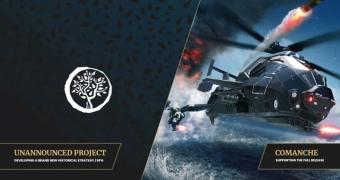 THQ Nordic has been pretty busy lately creating new studios that will bring us even more games. After revealing its new studio Alkimia Interactive will develop the Gothic Remake, THQ Nordic is back in the news with yet another new studio.

Ashborne Games is THQ Nordic’s newest studio, which is based in Brno, Czech Republic. The studio consists of veteran game developers, who previously worked on popular games like the Mafia-franchise, the ArmA: Armed Assault-franchise, Silent Hill: Downpour, Vigor, or the UFO-trilogy, UFO: Aftermath, UFO: Aftershock, and UFO: Afterlight.

Currently, the new studio is focused on laying the groundwork for a brand-new Strategy/RPG IP, but THQ Nordic announced Ashborne Games will also support Comanche in its early access phase, along with the game preview. Comanche is a reboot of the old helicopter shoot… (read more)