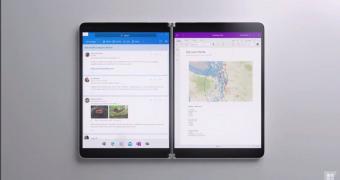 Surface Neo was a dual-screen device that was originally supposed to be part of Microsoft’s dual-screen form factory push, as it was announced the Surface Duo back in 2019.

And just like the Android device, the Surface Neo was projected to launch by the holiday season of 2020, though as we know already, not only this didn’t happen, but it’s being rumored this model has been completely killed off.

So in theory, the Surface Neo is a device that was only previewed as part of a dedicated Microsoft Surface hardware event, but nobody ever got the chance to take it home.

And if you still needed a closer look into what we won’t be getting, here’s a hands-on video with the Surface Neo and providing us with a live feel of the dual-screen form factor that Microsoft was originally planning.

Surface Neo was projected to come with Windows 10X, an operating system also built with dual-screen devices in mind. But given this form facto… (read more)