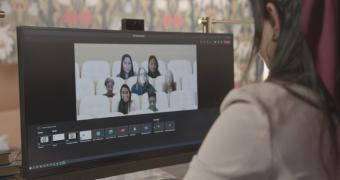 Microsoft is rapidly evolving the Microsoft Teams ecosystem, and the company has managed to turn this productivity service into a complete platform, with more and more partners noticing the potential it has and thus deciding to invest in it.

Including several hardware companies, that is, as Microsoft has announced at the Ignite event this week more hardware that was specifically built with Microsoft Teams in mind.

The first two are two monitors that bundled hardware that allow easy communications via Microsoft teams, including a microphone, a speaker, and a camera.

Of course, this isn’t much and it’s not by any means an industry-first, but what’s more special about these monitors is that Microsoft itself certified them for Microsoft Teams.