America has a problem. Due to increased law enforcement pressure and attention, the far right appears to be adopting the offline and off-grid model to evade surveillance.

While groups like Atomwaffen Division, the Base, and the Oath Keepers have made headlines as domestic terrorism threats, experts say that in the wake of federal crackdowns and the Capitol Hill insurrection, the far right is increasingly discussing organizational structures similar to that used by Timothy McVeigh, the mastermind behind the devastating Oklahoma City bombing in 1995.

Inside chat rooms and on Telegram channels frequented by accelerationist neo-Nazis, who believe acts of terror will hasten the collapse of the U.S. government, many proclaim the “anti-group” era has arrived, where public-facing organizations with symbols and propaganda are no longer viable, being too easily monitored and disrupted by the FBI. Instead, they say, local cells of no more than a half-dozen or so people organizing in person and planning attacks outside of traditional intelligence nets is the only way forward.

A move to more underground methods would starkly contrast the way the invasion of Capitol Hill was largely planned out in the open on Facebook and other social media platforms—something that made it very easy for the FBI to identify suspects. Offline terror cells present a major challenge for authorities trying to disrupt attacks before it’s too late.

“We want lone wolves, we want local cells without online recruitment,” one Telegram post from a well-followed accelerationist account recently preached, before pointing out that law enforcement, hot on the trail of domestic terrorists, is eager to infiltrate groups. “Without spending extensive resources, agencies like the DHS or FBI can’t trifle or sabotage. It doesn’t matter if you are organizing a cell via Steam, they can’t do ANYTHING if you know and trust each member personally.

“Oh and don’t forget, if you never actually take meaningful action none of this matters, you will fade away just like every failed movement before you.”

Another Telegram account known among accelerationists urged followers not to join militias akin to the Oath Keepers or III%ers.

“Forget about political solutions and forget about joining militias that allow themselves to be seen online,” said one of its posts. “I still don’t understand recruiters who promote their groups on Telegram and use email as a means for quick recruitment.”

The same account highlighted how terror groups like the Atomwaffen Division and the Base used social media and email accounts to recruit new members—some of them anti-fascist infiltrators out to expose internal communications, and, in the case of the Base, one an undercover FBI agent—and subsequently had several members arrested on terrorism-related charges.

Mollie Saltskog, an intelligence analyst at the Soufan Center, a private counterterrorism agency, said it was important to remember the historical precedents for the small-cell structure.

“Just because a cell is small doesn’t mean it cannot carry out extremely lethal acts of terrorism,” she said. “The 1995 Oklahoma City bombing is a case in point. Similar to McVeigh, these groups are also often inspired by and adhere to an ideology that not only justifies the use of violence against the government and innocent civilians, but also views it as desirable.”

McVeigh, a decorated veteran of Operation Desert Storm, planned and executed the Oklahoma City bombing that killed 168 people with two accomplices—both of whom, Terry Nichols and Michael Fortier, served in the military and had the tradecraft to help with what the FBI describes as “the deadliest act of homegrown terrorism in U.S. history.” The attack completely blindsided the intelligence community, which initially ran with the theory that it was the work of Middle Eastern terrorists. Since the bombing, McVeigh has become a much-celebrated figure for the far-right. The Base and Atomwaffen Division both considered his attack the model to strive for.

Saltskog said the rise of the decentralized cell is a clear indication of the evolution of far-right terror networks and their reaction to increased law enforcement attention.

“This is a dangerous development that can increase the threat these types of groups pose. If organization and planning happens in small cells completely offline, it becomes harder for law enforcement to monitor and thwart any planned attacks,” she said. “In addition, even if one cell is infiltrated or distrusted, this type of organizational structure still would not yield information about what another cell may be planning.”

According to Joshua Fisher-Birch, a terrorism analyst at the Counter Extremism Project, he detected an uptick in the promotion of the “unnamed org” and the decentralized cell model as early as last year, when the FBI began dismantling the Base, and as recently as last week, after the inauguration of the Biden administration.

“Two recent events that have led to increases in Telegram chatter advocating for creating small groups or networks have been the January 2020 arrests of members of the Base, and, more recently, the Biden administration’s prioritization of fighting white supremacist extremism,” he said. “While small unnamed groups are usually promoted in the belief that they are more secure from infiltration by law enforcement or anti-fascist activists, it also means that it is harder to track their activities, and makes it easier for propagandists to make unconfirmable claims regarding their size and effectiveness.” 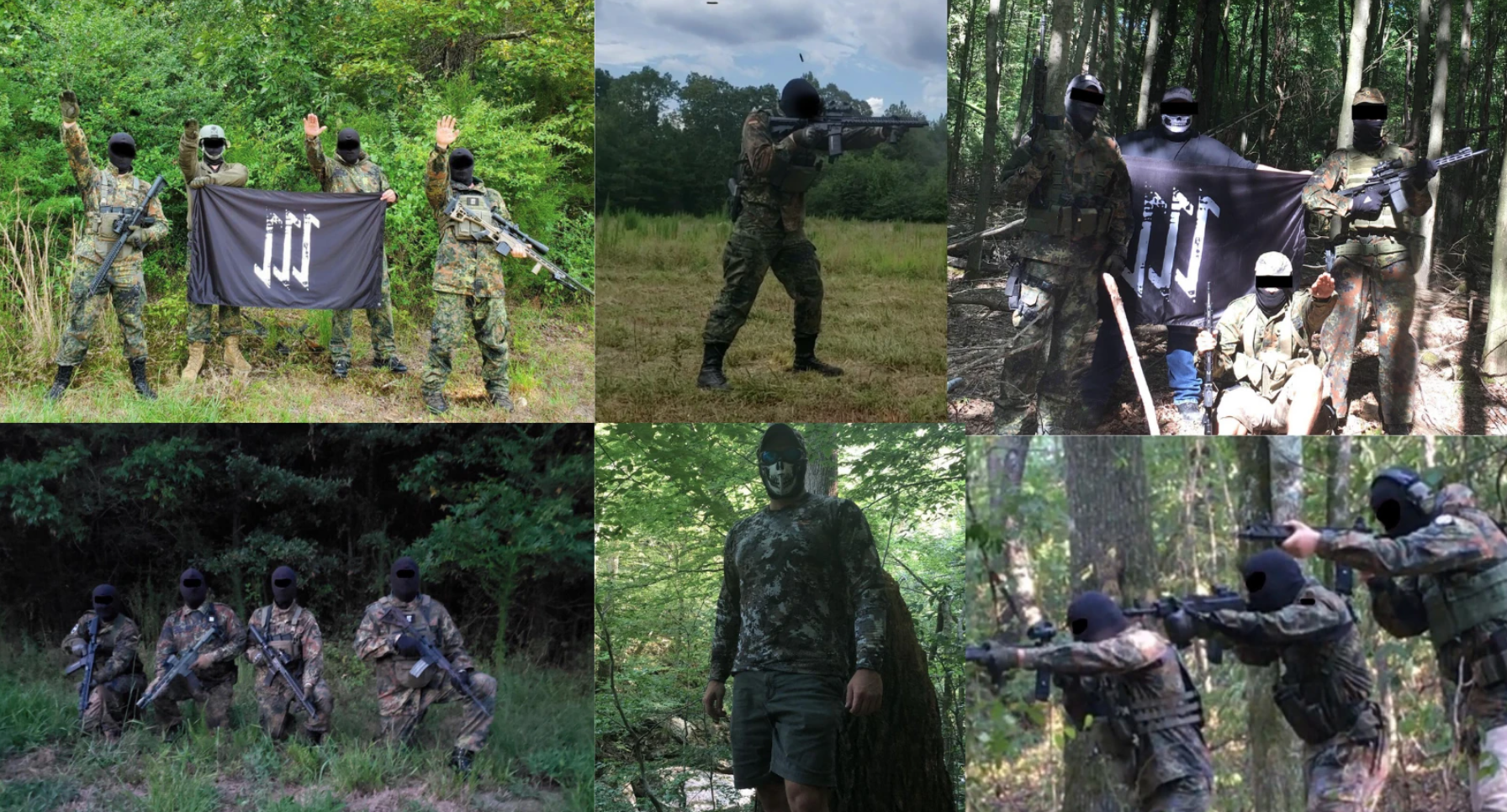 A COLLAGE OF TRAINING PHOTOS POSTED BY MEMBERS OF THE BASE.

The concept of the leaderless resistance and the focus on the autonomous group have long been a feature of the white nationalist terror movement. The Turner Diaries and Siege, books that are near holy writ among neo-Nazis, preach the value of small cells and unclaimed assassinations and bombings. Despite that doctrine of stealthiness, the rise of groups like Atomwaffen Division and the Base in the late aughts reflected the influence of jihadist terror groups like ISIS and al-Qaeda and their use of flashy, widely-shared propaganda videos as a means of recruitment.

Amarnath Amarasingam, an assistant professor of religion at Queen’s University who researches terrorism, said he isn’t surprised the far right is discussing shifting to the anti-group model, but that this wouldn’t necessarily work in the movement’s favor.

“The notion of leaderless resistance is almost four decades old in the far right,” he said. “But the main weakness is that even if you are operationally anti-group, you still need to be ideologically coherent as a broader social movement, probably have some sort of charismatic leadership and so on. Otherwise, the ideological coherence could start to factionalize and go adrift along with operational cells.”

Rinaldo Nazzaro, the founder of the Base, who is living in Russia and still attempting to foment an American insurgency from abroad, has argued that secretive and smaller groups aren’t effective. (Neither, he says, is publicly posting in Telegram chats, which he sees as “fedposting”—online behavior that will result in criminal prosecution—and yet does all the time.)

“If you don’t have a public group, few if any outside of it will know it even exists (by design, of course) which makes successfully networking fundamentally problematic if not flat-out impossible,” he wrote in a message to his followers viewed by VICE News.

In the last year alone, though, the Base has seen nine of its members picked up by FBI agents in raids across the country, largely due to infiltration of the group and its online communications network.

Accelerationist neo-Nazis are well aware that law enforcement has the ability to spy on them online. Operational security (“OPSEC,” for short), is at least in theory top of mind, and one well-known neo-Nazi channel offering advice on how to evade authorities advised that it was time to burn all social media accounts.

“If you are involved in any form of resistance to this anti-White System, then you needed to get your OPSEC on point yesterday,” said a post from the day of President Biden’s inauguration. “Purge your social media accounts. Get rid of any normie Google, Facebook, Twitter accounts etc. The first place your enemies will look is social media to find your face, occupation, and family.”

With files from Mack Lamoureux.