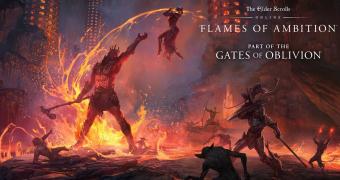 The Elder Scrolls Online is getting another piece of content today, Flames of Ambition. The new DLC introduces two epic dungeons but also brings a bucketload of free changes and improvements for PC players. For those wondering, The Flames of Ambition DLC will release on Xbox One and PlayStation 4 on March 16, so in about a week from now.

Flames of Ambition is the first step in The Gates of Oblivion’s year-long adventure and adds two new dungeons, the Cauldron and Black Drake Villa. While both dungeons are standalone stories in their own right, both also set up the events of the upcoming Blackwood Chapter and beyond.