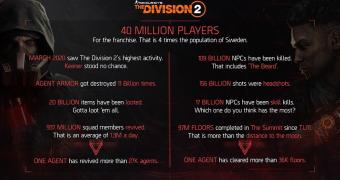 Ubisoft announced today that The Division franchise has reached over 40 million unique players. Also, the release of the Warlords of New York expansion one year ago saw the highest monthly active users for The Division 2.

That being said, if you’re still playing The Divison 2 or plan to pick up the game in the coming months, here is what you should expect from Ubisoft. The French developer announced plans to deliver new, meaningful content for The Division 2 in late 2021 at the earliest.

“As announced a few weeks back, we have begun work on new content for The Division 2. The development of this content will be led by a group of project veterans at Ubisoft Massive. This will see Adrian Trasca and Yannick Banchereau staying at the helm of the project as producer and associate creative director. We are also excited to anno… (read more)