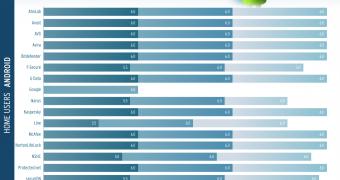 The days when antivirus solutions were only required on Windows are long gone, as pretty much any operating system out there is now being targeted by malicious actors out there.

Android obviously makes no exception, and it’s not just because you can install applications from outside the Google Play Store using the stand-alone APK installers, but also because malware sometimes makes its way to the store too.

So having an antivirus application installed on your Android device has become a recommended thing to do, though power users can very well stay protected by just following a set of simple recommendations, such as simply inspecting each app carefully and looking at ratings and reviews in the store.

The security experts at AV-TEST have conducted new research to determine the best antivirus solutions of Android, and the results pretty much speak for themselves. Once again, they confirm third-party protection is better than first party, even if it’s available free … (read more)

51 mins ago
wpDiscuz
Share this Article
Email sent!
We use cookies to ensure that we give you the best experience on our website. If you continue to use this site we will assume that you are happy with it.OkNo