Tesla’s most fervent supporters are exhibiting some odd behavior on social media and in forums regarding the Texas crash in which, according to local police, no one was in the driver’s seat when a Tesla crashed into a tree and two people died. Rather than waiting for the two different federal authorities investigating the crash to publish their findings, some Tesla owners are engaging in the classic behavior of conspiracy theorists and amateur internet sleuths in an apparent attempt to cast doubt on even the most basic facts surrounding the crash.

Tesla fans on Twitter, Reddit, and various Tesla fan forums first expressed skepticism with this narrative when what began as a relatively benign misunderstanding turned into the seedling for a conspiracy theory. Initial reports suggested that the battery of the Tesla in question burned for hours, but the Houston Chronicle subsequently reported the car battery fire was put out in a few minutes, and that firefighters did not have to call Tesla to ask how to put it out as originally reported. However, it was true, according to that same Chronicle article, that the battery flared up every once in a while even after being put out, but firefighters kept a stream of water on the battery to cool it down.

But the big shift came on Monday, two days after the crash, when Elon Musk tweeted that the car in question had not purchased one of the car’s semi-autonomous driving assist systems and said that the company checked its internal logs and found that “Autopilot” was not activated at the time of the crash.

This tweet set people on Tesla forums into action, with posters analyzing screenshots of local news clips, overhead maps with Mac Preview arrows drawn on top, and posting other telltale signs of amateur conspiracy theorists working themselves into a frenzy. Many posters have attempted to identify the exact spot of the crash, and have attempted to calculate the speed the car could have been going, or have speculated about specifically what happened.

“How fast would a Model S be going if autopilot is allowed to accelerate from a standstill in ~380 ft? Would it be fast enough to cause such an accident?” one person on the Tesla Motors Club forum posted along with a screenshot of where they believed the crash to be and what the possible trajectory of the car was. Others have been speculating about whether Autopilot was enabled, and, if it was, whether it was possible to do so on this specific street and whether it would be possible for one of the victims to enable it then move to the backseat. There are also countless posts speculating about the specific series of events that led to the crash. 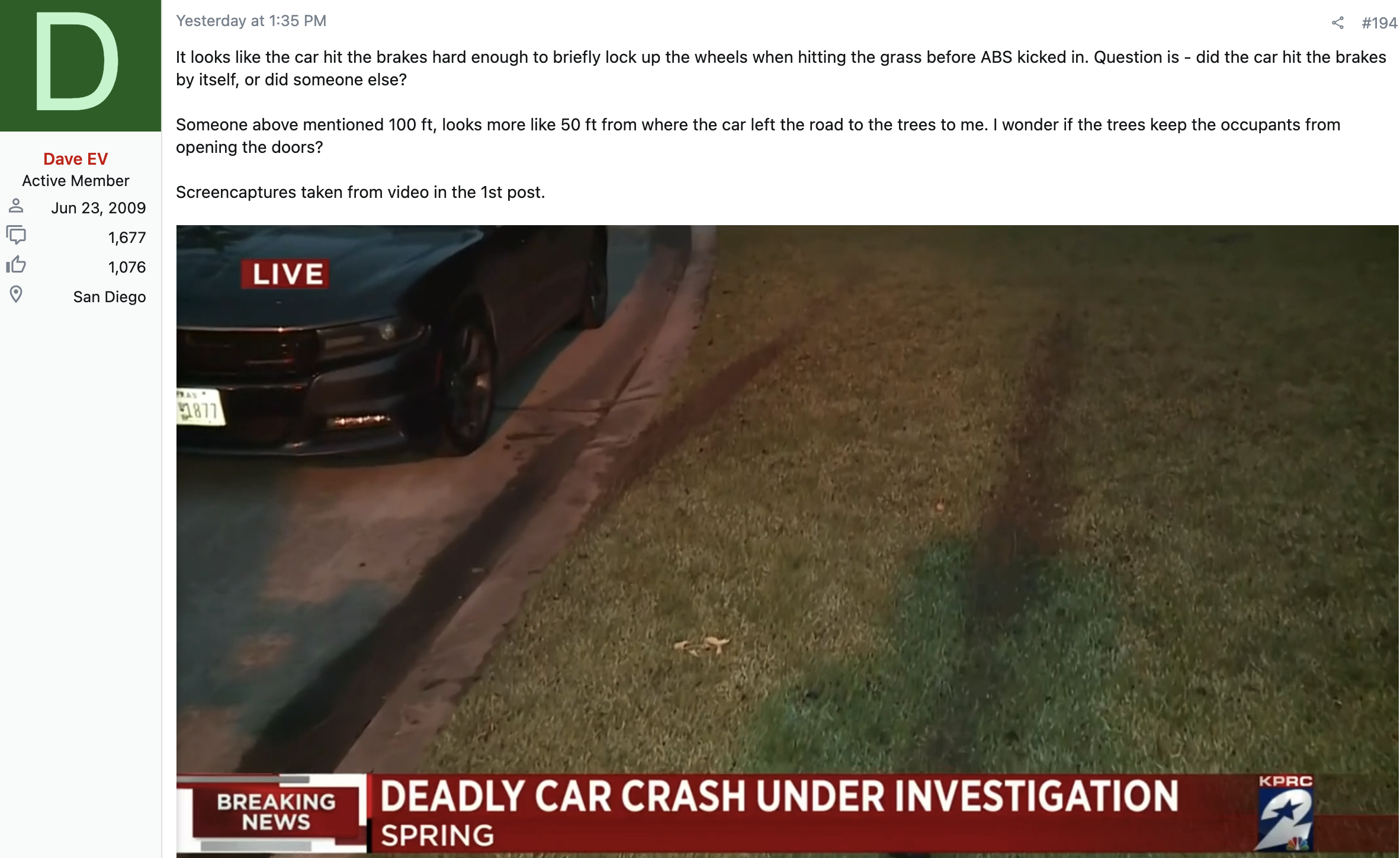 The posts mostly center on whether “Autopilot” could have been engaged on this particular type of cul de sac without street lines or a stated speed limit. Twitter user Sergio Rodriguez posted a video of his Tesla activating Autopilot on just such a street, exactly the type of action Musk said was not possible.

There are also countless threads on r/TeslaMotors about this crash. One of the most upvoted ones is titled “Since I’m the only Tesla owner at my job with 100s of employees, I keep having to hear about “the accident” non-stop, and it’s really annoying.” This post, which  begins with “Look I don’t really care how true or not true the events that reported are(and I’m sure they most likely aren’t reported accurately)” and quickly transitions to “These people don’t care about the lives lost in these accidents, it’s all about pushing an anti-EV ‘haha I told you so’ agenda.” This post, and the comments responding to it, seem to at least suggest something about the psyche of what’s going on here: Tesla owners feel as though, because someone crashed a Tesla somewhere, they have to both defend and explain what happened, and yet harbor obvious resentment feel the need to do those things

The only vaguely cohesive element to all of the line-drawing and forum postings is the idea that people—the media especially, naysayers more broadly—have an agenda against Tesla, an us-versus-them mindset digested straight from Musk’s feed. The “conspiracy” is, broadly, that Tesla receives an undue amount of scrutiny relative to other automakers, and this must be reflective of some effort to destroy Tesla before it overpowers the big automakers that pay “the media” advertising dollars while Tesla does not. The irony is this comes from the very same people who genuinely believe Teslas to be special, world-altering consumer products and the man who runs the company something between genius and deity, yet any additional media attention and scrutiny for these globe-altering products is automatically a source of suspicion.

For these people, to be a fan is to engage in world-building, a unique reality in which there are nefarious forces to fight against for the greater good. The truth will be revealed, one Elon Musk tweet and red Microsoft Paint line at a time, until finally the tangled web we weave is unspooled. For these people, two people tragically died in Texas, nothing is what it seems, and that is all that matters.

The Amazon union vote is being appealed, and the hearing begins today