Over the weekend Big Tech flexed its muscles, deciding that an attempted coup was a line in the sand, and finally made the one move that many have been waiting years for: Twitter, Facebook, Google, and others all deplatformed the president and his merry band of seditionists.

But on the web, social media platforms aren’t the only game in town to help spread lies and disinformation.

Over the years, companies like Taboola, Outbrain, and RevContent have created a cottage industry taking links from “all around the web,” dressing them up, and serving them on other sites.

Most of the content in these boxes is garbage. Or, chum. But make no mistake: these are all ads (even if they’re not actually labeled as ads). The links vary: Some are for mundane travel deals, others offer probably unsafe diet and health tips, tips on how to empty your bowels, articles and slideshows about celebrities who used to be ugly and now are hot / were hot and now are ugly, miracle enzymes that will save your life, etc. But, depending on the site, you may also see political disinformation, fake news, and conspiracy theories.

You see this type of content at the bottom of such respected news sites as Nola.com and Business Insider, filled from other respected websites like WhatTheHealth.life and ZenHerald. Legitimate news sites and corporations also send links to these sites to run elsewhere as part of a distribution and revenue strategy. VICE uses Outbrain links, as you can probably see by scrolling to the bottom of this story.

A content recommendation company like Taboola, which says it generated $1 billion in revenue in 2018 and reaches a billion users every month, essentially makes its money by acting as a marketplace for advertisers and publishers wanting to put up inventory; Taboola charges a fee, and then pays out a percentage of that to publishers when a user clicks on a link.

As a result, David Nyurenberg, the CEO of Valor Digital, a company that helps brands and agencies navigate digital media, told me, content recommendation companies need to be on as many domains as possible; even if they’re at the very bottom of the page and nobody ever sees their ad, they still get attribution credit. It’s how Taboola can boast that it sees a billion users.

“So they are actively disincentivized from policing their publisher network because turning off publishers will hinder their ability to cookie as many users as possible AND since they charge based on clicks, it is in their best interest for their ‘recommended content’ to be as click-baity and divisive as possible,” Nuremberg said. “Controversy get’s people to click on their ads. There is no reason beyond a few days of bad press to clean up their publisher and client ecosystem. It would be bad business.”

But beyond misleading headlines, these companies also distribute disinformation and conspiracy theories, often cloaked in innocuous scientific-sounding language, like this Taboola-served ad on Metro that reads “Scientists develop nasal spray that decreases the risk of infection by 78 percent.” 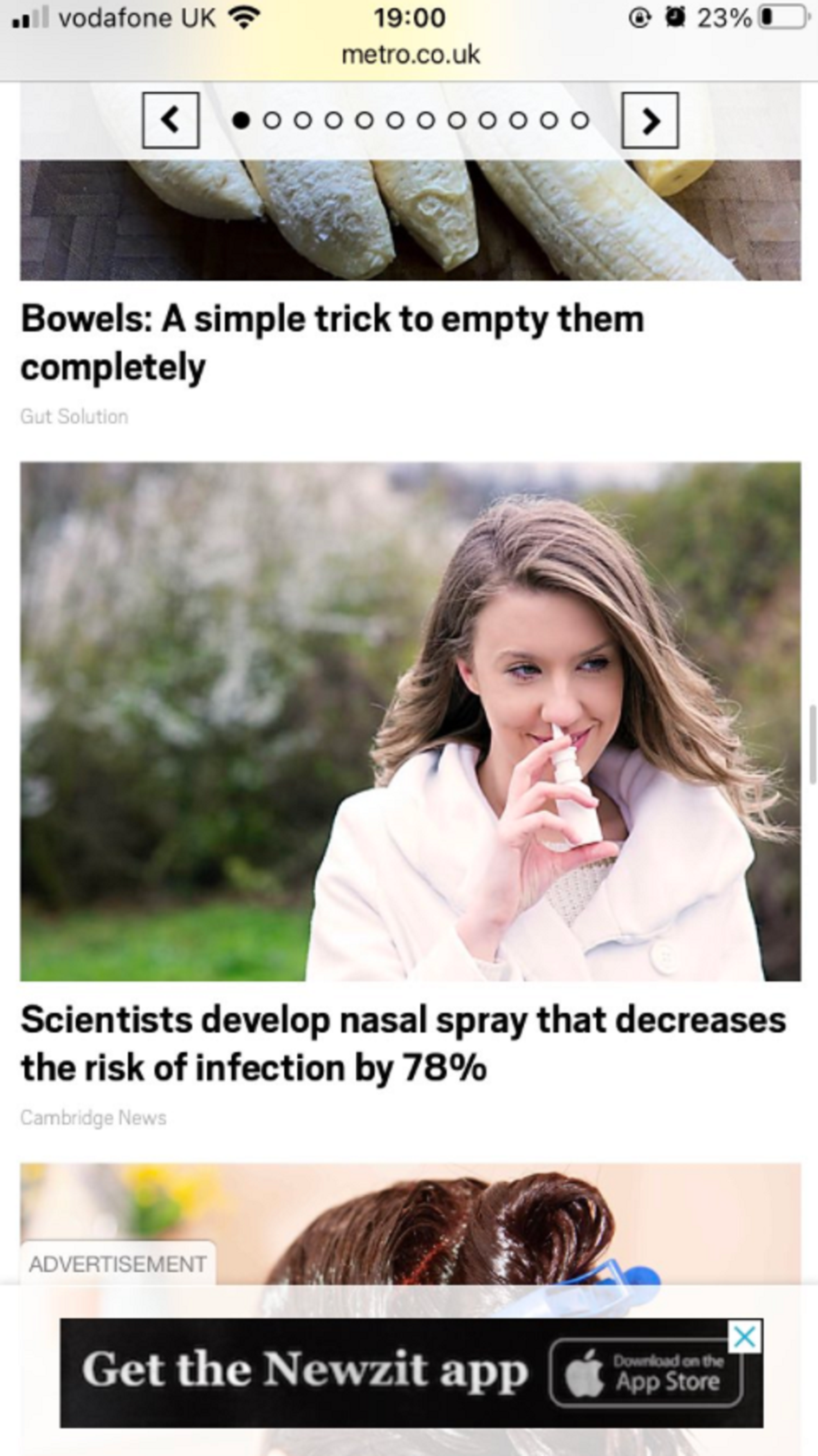 After flagging this on Twitter, Taboola responded that this content violated its services and took it down.

Publishers also help legitimize chumbox articles that at times contain misleading information. For example, Nyurenberg found these articles linked in a Taboola box on the Federalist website alongside articles promoted from Taboola. The only way to tell the difference between a Federalist article and a Taboola-promoted article in that section is the small grey text listing the name of the publication. 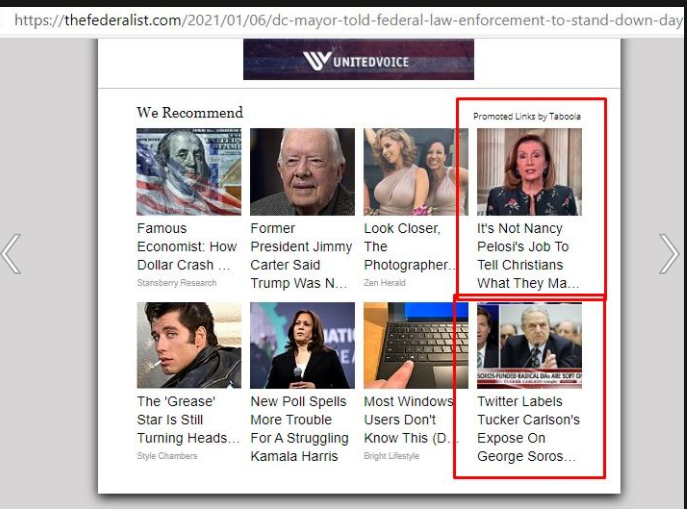 I emailed Taboola’s CEO Adam Singolda about its role in spreading disinformation. He said that the company was looking into this.

“Taboola invests heavily in manually reviewing publishers we work with and their content, using a full time content review team,” Singolda said in an email. “We have a strict policy against disseminating fake news. We continuously screen our publishers and, at times, fire any parties deemed to be distributing it.”

Singolda added the company has “a strong policy against working with any ‘bad actors,’ such as those that publish fake news.”

Even though these companies have policies in place against hate speech and fake news, the opaque nature of programmatic ad tech makes it hard to trace the ads and the money.

You’ll see a similar situation at the bottom of this article if you have your ad blocker turned off, where a “you may like” section contains Outbrain-promoted articles above a “more from VICE” section which actually contains other articles from VICE. Outbrain and Taboola were set to merge in an $850 million deal at the end of 2019, but the deal fell apart last year.

“The ‘content discovery widgets’ on the page can not only make discovery of false info websites easier, those widgets can also directly carry programmatic ads, resulting in ad revenue for the disinfo site,” said Augustine Fou, a digital marketer and independent fraud auditor. “This way content discovery tech platforms’ role in spreading disinfo is two-fold—they facilitate the discovery of false information, and they help disinfo sites make money so they can continue spreading more misinformation.”

Fou also said that we should separate out two issues: one, spreading misinformation and two, making money from digital ads. Sites that are meant for spreading misinformation, he said, can do so without making ad revenue, as they’re funded in other ways. Whereas fake sites, whose primary objective is to make money, can do so via ads. These are often conflated, he said.

“The way spreading misinfo and digital advertising are related is that the sites that spread disinformation now have an easy way to make money, via digital advertising (very profitable, very low risk),” Fou told me. “The Taboolas and Outbrains of the world make it easy for disinfo sites to ‘monetize’ because they provide the tech infrastructure and likely also ‘look the other way.’”

“I don’t think they can claim ‘oopsies’ they didn’t know they were helping in this way,” he added.