Update: The SpaceX launch video replay and continued livestream is below via YouTube. You can rewind or watch the embedded replay as they take 19 hours to dock.

Today’s SpaceX launch time was at 3:22pm EDT and the excitement continued for several minutes beyond the T-0 countdown. The new spacecraft lifted off, returning American NASA astronauts to space from US soil for the first time since 2011.

It’ll take US astronauts Doug Hurley and Bob Behnken a total of 19 hours to get to
dock with the International Space Station.

How to watch the SpaceX launch replay:

How to watch the SpaceX launch live stream via YouTube:

NASA astronauts are rocketing above Earth in the SpaceX-made Dragon capsule as you read this and they’re wearing SpaceX-designed spacesuits. The Space Shuttle era ended nine years ago and SpaceX has picked up where NASA left off.

The live stream commentary is also brilliant, insightful and inspiring regarding the future of commercial space travel. It continues, but if you’d like to rewind the live video stream, you’ll learn a lot exciting facts about what’s happening high above our heads.

Here’s a fantastic view from the SpaceX live video of the Dragon Crew fully separated and on the way to the International Space Station. 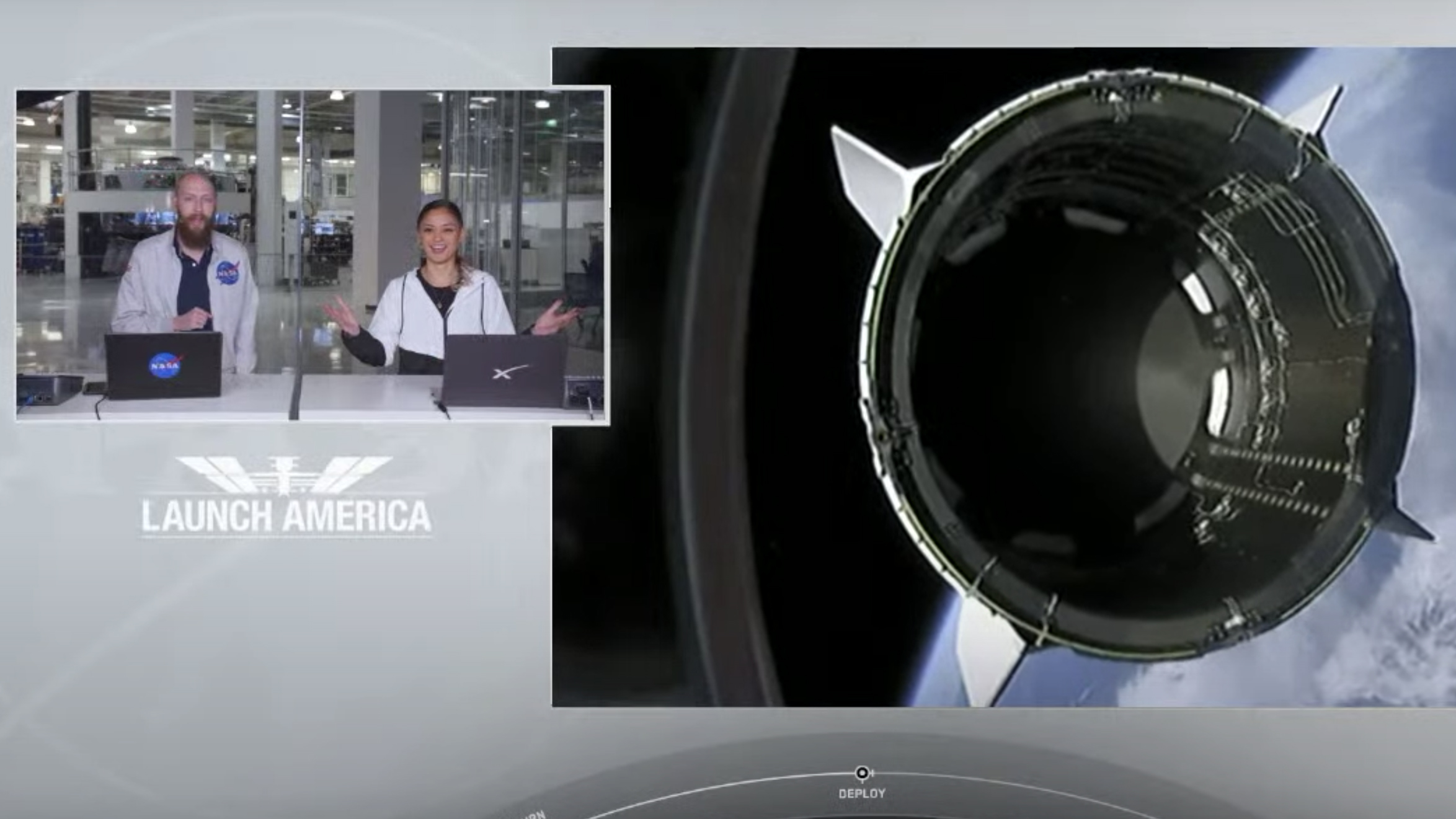 Okay, yes, it felt like deja vu today if you were like us and watched the SpaceX live stream this past Wednesday. But unlike that first launch attempt, Saturday’s launch countdown didn’t stop at T-minus 17 minutes. Instead, history was made.

It wasn’t always clear that today’s launch would happen, even minutes before the launch window. “We are predicting a 50/50 shot of going this time,” said NASA administrator NASA administrator Jim Bridenstine at the top of the SpaceX live stream. “But given the fact that we are in late May – in Florida – we have to take every shot that we can get.”

SpaceX and NASA officials were very glad to take that shot. You can see from SpaceX founder Elon Musk’s most recent tweet, we’re well underway, and there were plenty of cheers from the watch area surrounding the Florida launchpad.

Today’s SpaceX Demo-2 mission was delayed and a second attempt, but it was always going to be historic, as it’s happening at NASA’s Kennedy Space Center in Cape Canaveral, Florida. It’s the first such launch on US soil in nearly a decade – since NASA retired the Space Shuttle nine years ago. It’s also the first time that a SpaceX reusable spacecraft has sent NASA astronauts into space. It’s the birth of commercially-backed human space travel.

The destination of this SpaceX launch is the International Space Station (ISS) for a one- to four-month duration for NASA astronauts Doug Hurley and Bob Behnken, according to our friends over at Space.com. 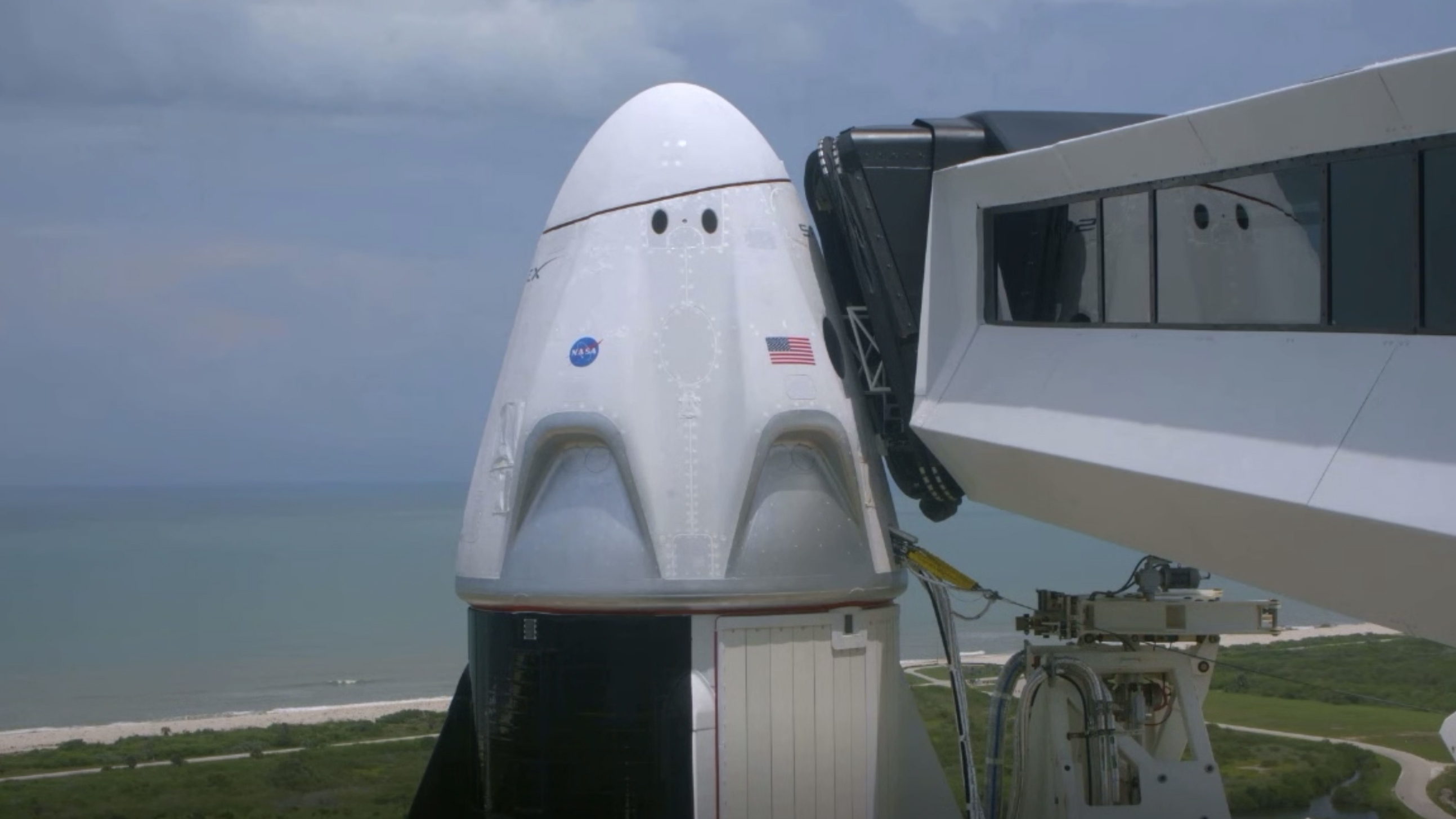 The UK SpaceX launch time was 20:22 BST. In addition to tuning into the video live stream, you were able to go outside soon afterward and maybe catch a glimpse of the SpaceX-built spacecraft in the night sky at around 20:40 BST.

In Australia, it was already Sunday morning, with the new launch time occurring at 5:22am AEST. 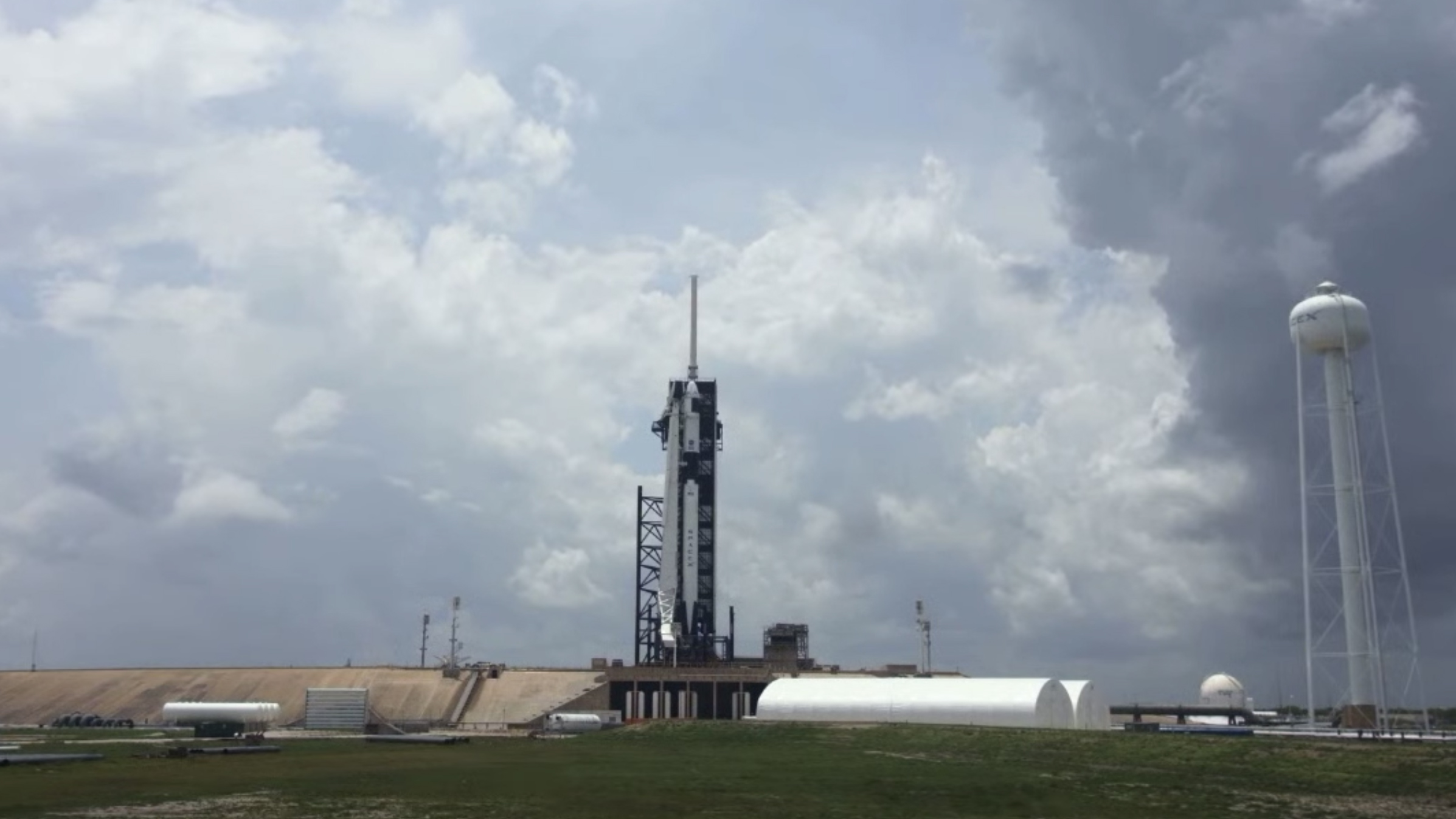 Up until the last few minutes of Saturday’s SpaceX launch, weather was a concern. It wouldn’t have been time, as we saw this play out on Wednesday: “The weather got us,” admitted NASA administrator Jim Bridenstine in a somber 30-second Twitter video on Wednesday. “I know there was a lot of disappointment today.”

Bridenstine went on to explain the reasoning behind what we all saw: the SpaceX launch was scrubbed just 17 minutes inside the launch window, with NASA hanging on until the last minutes in an effort to save its efforts. The weather didn’t cooperate.

NASA has strict weather rules for clearing spacecraft launches and noted that three weather violations existed, including the chance of the craft triggering ‘natural lightning’. If they would have been able to wait ten minutes beyond the countdown, they could have cleared those three violations, according to SpaceX and NASA officials.

Waiting even ten minutes wasn’t an option, though. This launch was what’s known as an ‘instantaneous launch window’, meaning due orbital mechanics a delay wasn’t possible if the crew wanted to get to the International Space Station (ISS) on time and lock in accurately. Blame Newtown’s law of universal gravity, if you’d like.

The good news is that everything technical with the SpaceX craft and NASA crew was ‘go for liftoff’ on Wednesday when the hatch door successfully closed. So as long as this weekend’s weather cooperates and doesn’t trigger NASA’s risk calculations, the mission will happen on Saturday. Weather was the only concern, according to NASA during the live stream wrap-up.

Even with all of the exceptional planning ahead of this SpaceX launch, NASA and SpaceX can’t control the weather (not yet anyway). Florida, while normally sunny, does have frequent quick-moving thunderstorms (anyone who has ever visited nearby Disney World knows that), and that’s what the crew faced Wednesday.

The SpaceX launch live stream had constant chatter from operators discussing rain conditions. They waited until a few minutes before the countdown expired to scrub the mission, hoping to pull it off. They got to T-minus 17 minutes before making the final decision. Saturday, May 30 will be the next launch date for the SpaceX launch.

Another weather variable is the fact that the weather conditions need to be good everywhere this spacecraft might be. For example, if the crew had to abort anywhere along their ascent and come down, recovery crews would need to access the capsule, so it’s more than just the immediate Florida launchpad that needs ideal weather. 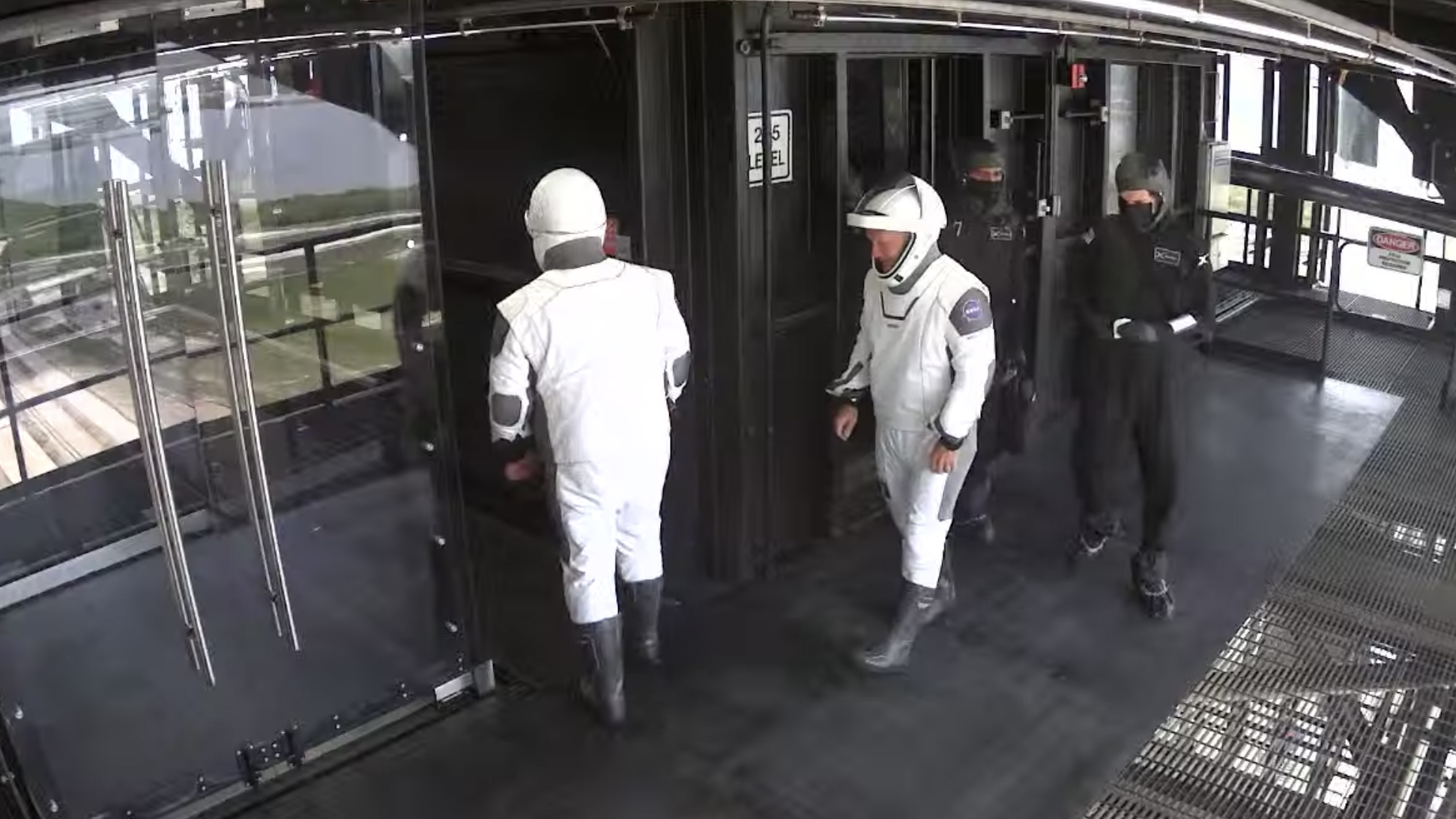 How to watch the SpaceX launch on Saturday

The official NASA and SpaceX YouTube accounts will be offering a live stream of the preparations, which they noted will feel like deja vu if you had already tuned in for the Wednesday launch.

We have the YouTube video embedded (at the top of the page) that is now¸ live. You won’t have to travel very far. And don’t worry, you don’t have to tune into both the NASA and SpaceX live stream videos – they’re offering the same content across the two live streams,

On Wednesday, we saw SpaceX founder Elon Musk visit suited-up astronauts Doug Hurley and Bob Behnken and exchange a few words before liftoff time. Sadly, there was no audio during this portion of the live stream.

Musk then greeted US Vice President Mike Pence, who is there to watch the launch, while President Donald Trump joined soon after. Hurley and Behnken traveled to the launch site in a Tesla Model X (Tesla being another company Musk founded).

NASA continued to monitor the weather via data sensors around the launch site in an effort to get everything into ‘the green position’ on their maps. At the time, NASA said, “the weather is trending in the right direction,” but as the countdown got to T-minus 17 minutes, favorability went the other direction.

This meant that the crew was seated in the capsule after crossing the crew access arm, and the crew arm had already retracted. Steam started to come off of the rocket before the launch was called off. It was that close to liftoff. 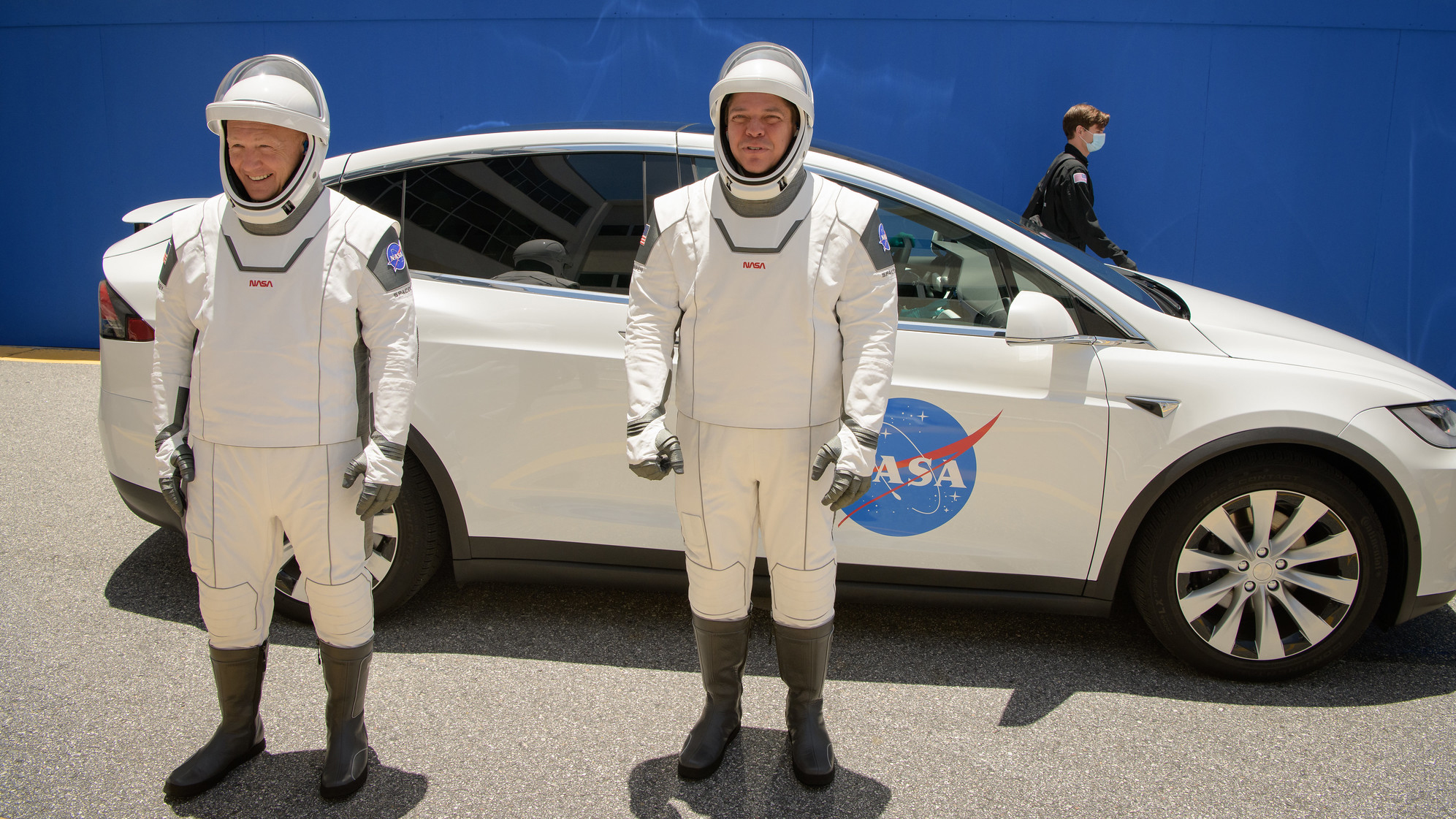 Now that it’s Saturday, astronauts Doug Hurley and Bob Behnken are back inside the small Dragon capsule, which sits atop the SpaceX Falcon 9 rocket. It’s situated on a launch pad at legendary Launch Complex 39A at the Kennedy Space Center in Florida’s Cape Canaveral.

LC-39A was originally built for the Apollo missions and remodeled for the Space Shuttle program. Now it’s home to the first space flight to send astronauts into space using a private aerospace company.

Hurley (the spacecraft commander) and Behnken (the joint operations commander) are NASA astronauts, engineers and both former members of US military (Hurley is a former marine, while Behnken was in the US Air Force).

The two-man NASA crew will not only be flying in a SpaceX-built spacecraft, but also outfitted in SpaceX pressurized suits, first shown off in 2017. They’re back suited up again for Saturday’s SpaceX launch.

The complete Python programming certification bootcamp is currently 98% off

Put your Charlize Theron movie smarts to the test with Name That Flick! We’ll give you the cast and you try to guess the film. GO! https://bit.ly/2CheCrW

The Super Soaker is probably one of the best toys of all time, but it was never actually supposed to be a toy.
Meet the the NASA scientist who accidentally invented the Super Soaker.

Instacart, whose business has soared during the pandemic, is partnering with one of Amazon's biggest rivals: Walmart. It will offer a same-day delivery option at locations in four markets -- Los Angeles, San Francisco, San Diego and Tulsa. https://cnn.it/2XNkRv1

In a pair of interviews on Tuesday, President Trump railed against his competitor for being weak on China -- but stopped short himself of condemning China's repression of its Uyghur ethnic minority or its crackdown on political freedoms in Hong Kong. https://cnn.it/3aezUTE