In the spring of 1900, divers hunting for sponges off the coast of Antikythera, a Greek island in the Aegean Sea, discovered a Roman-era shipwreck that contained an artifact destined to dramatically alter our understanding of the ancient world.

Known as the Antikythera Mechanism, the object is a highly sophisticated astronomical calculator that dates back more than 2,000 years. Since its recovery from the shipwreck in 1901, generations of researchers have marveled over its stunning complexity and inscrutable workings, earning it a reputation as the world’s first known analog computer.

The device’s gears and displays cumulatively demonstrated the motions of the planets and the Sun, the phases of the lunar calendar, the position of Zodiac constellations, and even the timing of athletic events such as the ancient Olympic Games. The device also reflects a very ancient idea of the cosmos, with Earth at the center.

While some of the calculator’s mysteries have been solved over the past century, scientists at University College London’s Antikythera Research Team present, for the first time, “a radical new model that matches all the data and culminates in an elegant display of the ancient Greek Cosmos,” according to a study published on Friday in Scientific Reports.

Led by Tony Freeth, a mechanical engineer at UCL and a leading world expert on the mechanism, the interdisciplinary team called the artifact “an ancient Greek astronomical compendium of staggering ambition” and “a beautiful conception, translated by superb engineering into a device of genius,” in the study.

“This is such a special device,” said Adam Wojcik, a materials scientist at UCL and a co-author of the study, in a call. “It’s just so out-of-this world, given what we know, or knew, about contemporary ancient Greek technology. It’s unique and there’s nothing else that remotely approaches it for centuries, or maybe a millennia afterwards.”

“However, it exists and all the scholarship points to the fact that it is ancient Greek,” added Wojcik, who has been fascinated by the artifact since he was a child. “There’s no question about it and we just have to accept that there is so much about what they could do that we just don’t know and we can’t fathom. The mechanism is a window on that.”

Understanding the clockwork instrumentation of the Antikythera Mechanism has been a longstanding challenge for scientists because only a third of the artifact survived its multi-millennia entombment under the Mediterranean waves. The remains of the calculator include 82 fragments, some of which contain complex gears and once-hidden inscriptions, which were wedged between front and back display faces during the bygone era in which the artifact was fully intact.

As new experimental techniques emerged, research teams have been able to explain the purpose and dynamics of the Antikythera Mechanism’s back face, which includes a system of eclipse predictions. In particular, the use of surface imaging and high-resolution X-ray tomography on the artifact, described in a 2006 study also led by Freeth, revealed scores of never-before-seen inscriptions that helpfully amount to a user’s guide to the mechanism.

Now, Freeth and his colleagues believe they have tackled the missing piece of the puzzle: the complicated gearworks underlying the front “Cosmos” display of the calculator. Virtually nothing from this front section survived, and “no previous reconstruction has come close to matching the data” that does exist, according to the study.

The new paper “has synthesized other people’s work, and dealt with all the loose ends and the uncomfortable nuances that other people just simply ignored,” Wojcik said. “For example, there are certain features in the surviving bits—holes and pillars and things like that—which people have said: ‘well, we’ll just ignore that in our explanation. There must be a use for that but we don’t know what it is so we’ll just ignore it.’”

“Effectively, what we’ve done is we’ve not ignored anything,” he added. “So the enigmatic pillars and holes, all of a sudden, now make sense in our solution. It all comes together and it fits the inscriptional evidence.”

The inscriptions from the 2006 study suggest that the missing Cosmos display was a moving set of rings charting out the motion of Mercury, Venus, Mars, Jupiter, and Saturn—each represented by a small gem—along with the path of the Sun, the phases of the Moon, and the positions of the Zodiac constellations. In addition to studying these inscriptions, the researchers created computer simulations and partial replicas of the device to test out their novel model.

One of the biggest hints emerged from analysis conducted in 2016 that revealed inscriptions in the front cover that included a pair of values, 462 years and 442 years, that the mechanism’s makers associated with Venus and Saturn. The researchers were able to identify a possible source for these numbers, derived from the work of the pre-Socratic philosopher Parmenides.

These values are ancient Greek calculations of the synodic periods of the planets, meaning they represent the time it takes for planets to return to the same apparent position in the sky as viewed from Earth, according to the study. 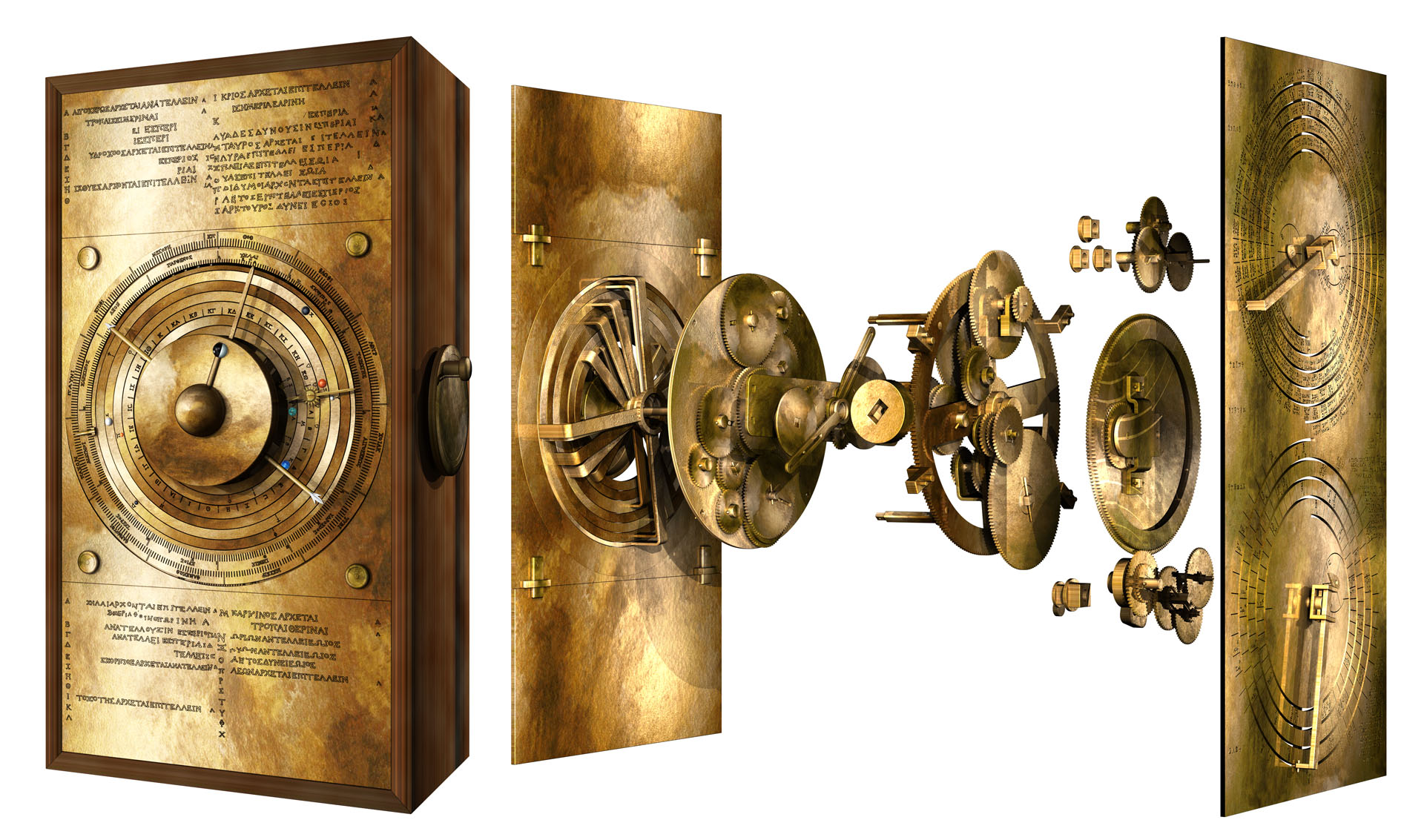 The cycles were complicated by the ancient belief that Earth was at the center of the solar system. This geocentric bias required the invention of complex models to account for the retrograde motion of planets: a phenomenon in which planets appear to move in occasional backward loops. The effect is an optical illusion that occurs when faster moving planets overtake slower counterparts during their orbital periods around the Sun, but the Greeks devised intricate mechanisms and cycles to find alternate explanations.

The synodic cycles revealed for Venus and Saturn enabled the team to reverse-engineer a system of gears with the right amount of teeth to produce the kind of planetary motion described in the inscriptions—complete with retrograde motions that showed up on the front face. This would be a relatively easy task for one planet, but representing all five known planets involved extremely ingenious engineers.

“If you’re going to show all the planets, you’re going to have to get all their positions correct,” explained Wolcik. “As you rotate the handle on the side of the mechanism, all these little planets start to move around like clockwork in this kind of mini-planetarium and occasionally, one of them will turn backwards, and then it would move forwards again, and then another one, further out, will start to turn backwards.”

“But at any one point, when you stop the machine, it’s got to give you a faithful reproduction of the heavens because that’s the purpose of the machine,” he said.

To recreate this effect in their model, the team deduced the cycles for the other planets, based on the Venus and Saturn data, then devised an elaborate system of gears that could reproduce them. The whole gear drive was meticulously optimized to fit into a small space between the front and back plates.

The complete digital reconstruction of the artifact is exceptionally intricate, so you should definitely watch the documentary embedded above to see the visualizations of all the overlapping gears, pins, dials, and plates that the team thinks meshed together into this mind-boggling astronomical computer.

The new work reveals a spectacular rendering of the complete mechanism, which comes closer to fitting all of the bizarre pieces of the puzzle together than any previous model. But that does not mean that the artifact has divulged all of its mysteries—not even close.

Freeth, Wojcik, and their colleagues now hope to replicate the full machinery of their model using the technologies available to its Greek creators, which presents both an enormous challenge and an exhilarating new chapter in the ongoing saga of the Antikythera Mechanism.

“It is so remarkable in terms of its requirements for accuracy and manufacturing ability that it’s out of sync with what we think Greeks could have achieved,” Wolcik said. “But we have to accept that that is the way the machine worked, and the Greeks made it.”

“Unless it’s from outer space, we have to find a way in which the Greeks could have made it,” he concluded. “That’s the next stage and the exciting bit is, I think that’s the final piece of the jigsaw.”