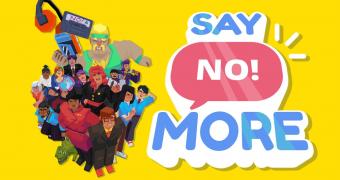 A colleague wants coffee, with no milk. Another needs his toner refreshed. A boss asks for overtime. Another leader talks about giving it all to the company. All we want to do is to scream a big, fat “No” in their face and focus on what’s important for each of us. In the real world that’s often hard to do, but in this game that’s all you need to do to make the world better.

Say No! More is developed by Studio Fizbin and published by Thunderful Publishing. I played the game on the PC via Steam but it is also offered on the Nintendo Switch. The experience is very narrative-focused, driven by a very positive message about confidence and self-expression.

Players take the role of a character known as The Intern. She is unable to resist the indignities of the first day of work for a major company, which include coffee runs and a general toxic work environment. Everything changes when she finds a cassette (this is a world of Walkman players and hulky computers) with an Au… (read more)