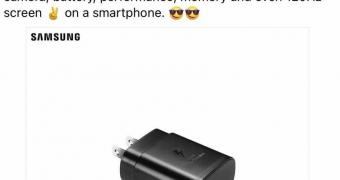 Apple once again took the world by surprise the last fall when it announced the iPhone 12 would ship without a charger in the box, pretty much forcing customers to buy one separately, obviously if they don’t already own such an accessory.

Needless to say, this was quite a controversial approach, and some rushed to mock the company for this surprising idea that many obviously didn’t like.

Samsung was one of the companies that actually saw Apple’s decision as a marketing opportunity, so the South Koreans publicly mocked their American rival for removing the charger from the iPhone 12 box.

“Your Galaxy does give you what you are looking for. From the most basic as a charger, to the best camera, battery, performance, memory, and even 120Hz screen on a smartphone,” the company said.

Galaxy S21 without a charger

And yet, it read more)