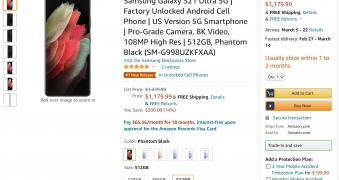 Samsung launched the Galaxy S21 lineup with much fanfare last month, and the device started shipping in late January, yet the South Koreans are already releasing the first major price cuts for the entire series.

The discounts are currently available in Samsung’s Amazon store and are targeted at all three models in the Galaxy S21 lineup, namely the standard version, the S21+, and the S21 Ultra.

Needless to say, the base Galaxy S21 remains the most affordable model, but while the pricing originally started at $799, you can now get the device at no less than $699 thanks to a $100 price cut. The same for the 256GB version, which can be yours from Amazon for $749.

And last but not least, the Ultra, which is the best of the best right now, is also getting a $200 price cut, wi… (read more)

PS5 And PS4’s Most-Downloaded Games In February Include GTA 5, FIFA 21