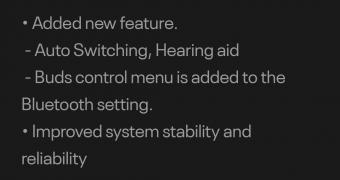 Samsung has released a new software update for the Galaxy Buds Live, this time bringing a bunch of new features that are certainly good news.

First and foremost, it’s important to know that Samsung hasn’t officially announced this update, but it’s now going live for users across the world as firmware version R180XXU0AUB5. The update weighs in just 2.2 MB, so it’s downloaded and installed in less than a minute.

There are two important features in this new release.

The first of them is auto switching, a feature that will clearly come in handy to those who use more than one Samsung mobile device. If you are logged in with the same Samsung account on more than one device and the Galaxy Buds Live are paired, they should automatically switch to the active device when they detect an incoming call or media that starts playing.

Hearing aids coming to the earbuds