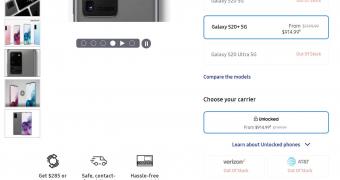 Now that the Galaxy S21 is official, Samsung barely has a reason to sell the previous model. And apparently, the company knows this very well, and this week it decided to pull the Galaxy S20 from most markets. Or at least, that’s what a recent report claims, as the device has gone out of stock, and it’s believed no more units would arrive in stores.

While at first glance such a decision makes sense for Samsung, it doesn’t for customers.

First and foremost, the Galaxy S20 has never met expectations, as the device launched at the worst possible time. It was announced in February 2020 and went on a sale a month later at a time when the entire world was entering a lockdown caused by the invisible enemy we’re still trying to deal with.

The impact on the Galaxy S20 has been massive, so its sales have been rather disappointing, and this is believed to be one… (read more)