“We have the TRUTH,” the Donald Trump campaign emailed its tens of millions of subscribers at 1:24 PM on January 6. “Every single Patriot from across the Country must step up RIGHT NOW if we’re going to successfully DEFEND the integrity of this Election. President Trump is calling on YOU to bolster our Official Defend America Fund.”

Less than 30 minutes later, the gates of the Capitol were breached by hundreds of Trump supporters in a violent insurrection that left at least five people dead. Since then, the Trump campaign, which normally sends multiple emails a day from the address contact@victory.donaldtrump.com, has been eerily silent.

To send its emails, the Trump campaign uses infrastructure from a company called ExactTarget, an email marketing firm now owned by Salesforce, according to a Motherboard analysis of the emails. The emails are sent in conjunction with the Republican National Committee, according to the emails themselves. In response to a question about whether the company had taken action to prevent Trump from using the “contact@victory.donaldtrump.com” email infrastructure, Salesforce said it had “taken action” against the RNC to “prevent its use of our services in any way that could lead to violence.”

“We are all deeply troubled by the terrible events of January 6. And while we all hope that they are never repeated, sadly there remains a risk of politically incited violence across the country,” Salesforce said in a statement. “The Republican National Committee has been a long-standing customer, predating the current Administration, and we have taken action to prevent its use of our services in any way that could lead to violence.” 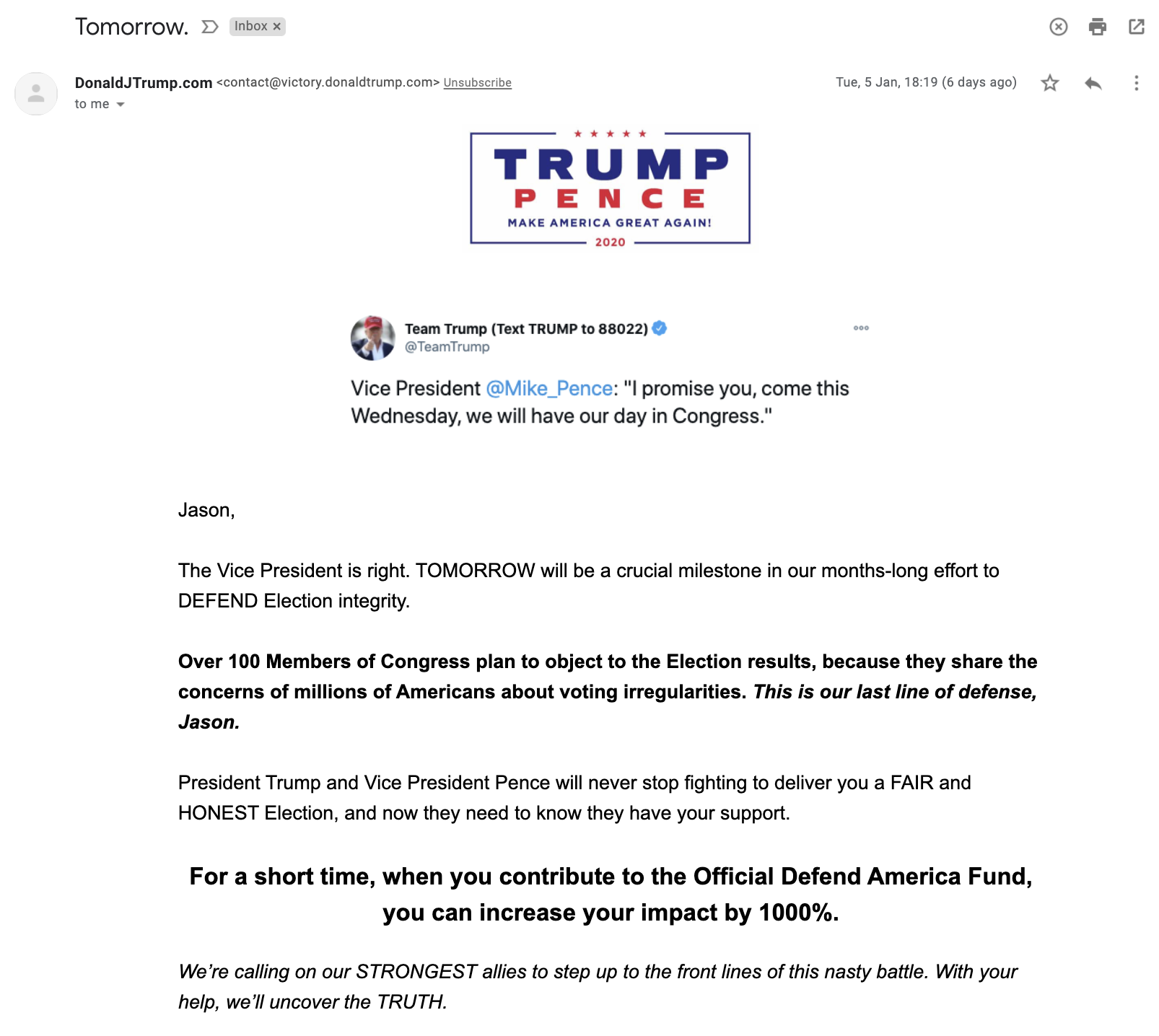 Emails sent from victory.donaldtrump.com come from the “Trump Make America Great Again Committee, a joint fundraising committee authorized by and composed of Donald J. Trump for President, Inc., Save America, and the Republican National Committee,” according to language in the emails themselves.

The election ended in the first weeks of November, but that hadn’t stopped the Trump campaign from sending many emails every day, and from begging supporters for money. The campaign sent four emails the morning of January 6, nine emails on January 5, six emails on January 4. Between November 3 and January 6—after the election—the campaign sent 569 emails. Its sudden silence, especially after Trump got banned by Twitter, Facebook, and a host of other platforms, was mysterious. 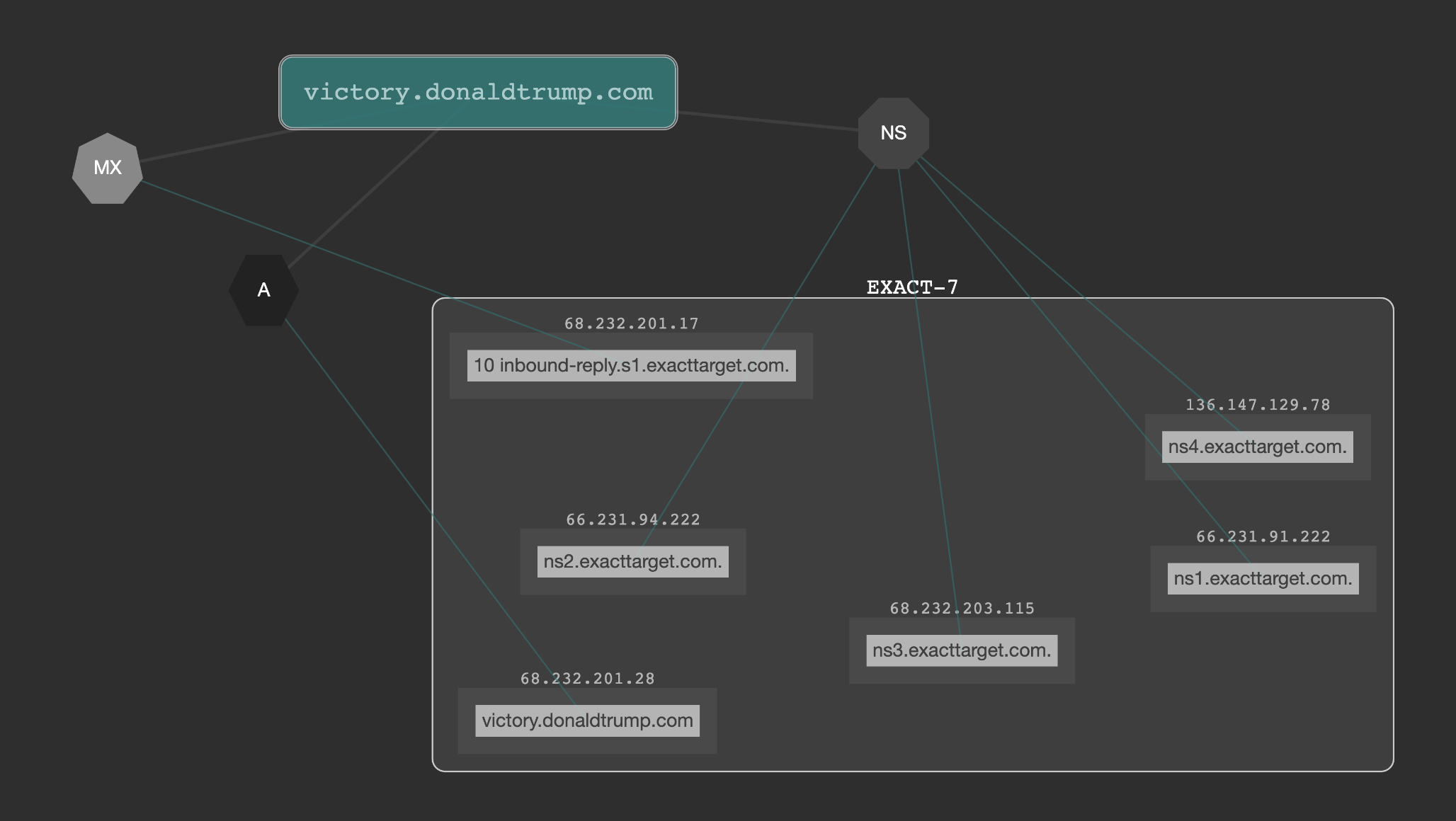 The tenor of emails sent to his supporters in the leadup to January 6 were certainly inflammatory, with nearly every email suggesting that the election was fraudulent, that Democrats had stolen the election, and that Congress needed to be pressured to overturn the results to keep Trump in power. Every email asks supporters to donate money, often with a matching component. 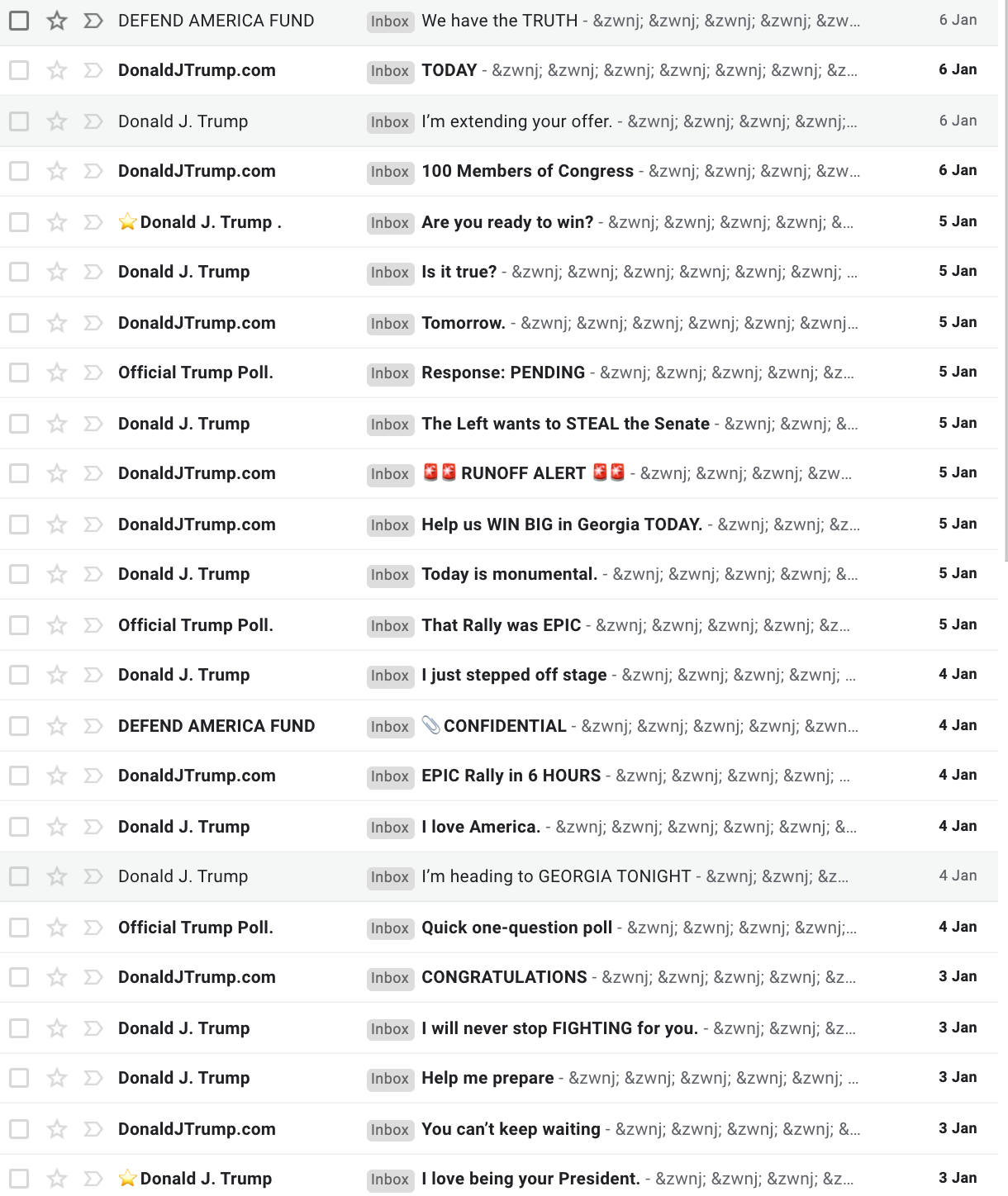 The money goes to the “Trump Make America Great Again Committee,” which is a fundraising committee comprised of Donald J. Trump for President, Inc., Save America, and the Republican National Committee. Contributions in recent weeks have gone in part to Trump’s doomed lawsuits, recount funds, and to the RNC.

It’s difficult to say how many subscribers the Trump campaign’s email list has, but according to a New York Times report from October 2018, the campaign was at one point selling roughly 20 million of his supporters’ email addresses and phone numbers.