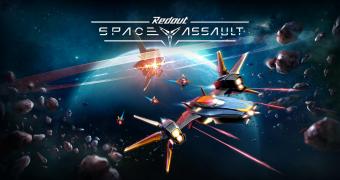 With a screen filled with big magenta balls of enemy fire, I duck into a corner of my screen and rely on missiles to try and take out enemy drones. That’s when fighters drop into the picture, firing their own long-range guided rockets, which forces me into a series of barrel rolls, which successfully evade all but one. But my shields are now low and some big turret yellow fire takes out the rest and my ship is quickly destroyed. Should I just retry this engagement or is it a better idea to invest in some upgrades before launching into battle again?

Redout: Space Assault is, as the name implies, a space-based action game developed and published by 34BigThings. I played the title on the PC (via Steam), but it is also available on the Xbox One, PlayStation 4, and Nintendo Switch. The entire experience was initially launched for mobile phones.

Gamers will inhabit the virtual skin of Leon, a h… (read more)