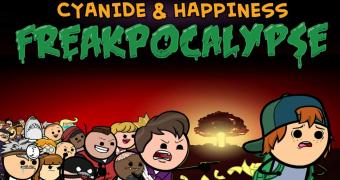 Cyanide & Happiness: Freakpocalypse is a hilarious point & click adventure scheduled for release on March 11. Pre-orders will open on March 4 and fans of the genre will be able to pick this one up on PC (via Steam) and Nintendo Switch (via Nintendo eShop).

Developed by Skeleton Crew Studios and Explosm Games, Cyanide & Happiness: Freakpocalypse is better described as a “tragilogy,” a game filled with dark comedy, drama, and weirdness. The game was first announced in 2017 and brought to life through Kickstarter, making it the first game to allow fans of the Cyanide & Happiness animated shorts, webcomics, and card games, to interact with their favorite universe.

To say that the story presented in Cyanide & Happiness: Freakpocalyse is generic would be so much from the truth. Although the protagonist, Cooper “Coop” McCarthy, does normal high school things, like trying to find a … (read more)