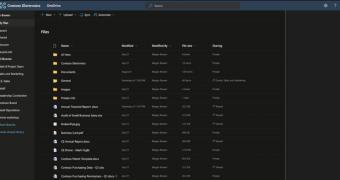 Dark modes are the new must-have feature of apps out there, and as the world’s largest software company, Microsoft obviously couldn’t just ignore this trend.

This is why the company has been working hard of bringing a dark mode pretty much to every little piece of software that it makes, starting with Windows 10 and ending with its mobile apps.

As you probably know already, Windows 10 itself already comes with a dark mode, and so does Microsoft Edge browser, which is now based on the Chromium engine and is the new feature in the operating system.

But Microsoft doesn’t want to just limit this update to apps on the desktop and mobile devices, so the company has also started the work on bringing a dark mode to its web services.

As you probably know already if you’re using OneDrive, the official apps already come with a dark mode regardless of platform.