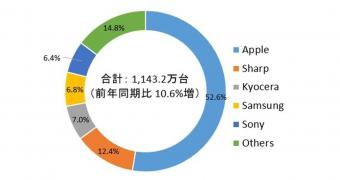 New data shared by IDC for the Japanese market shows not only that Apple is the number one phone brand in the country but also that the Cupertino-based tech giant has absolutely no rival locally.

The Q4 figures indicate Apple has managed to secure a market share of no less than 52.6 percent, which means more than 1 in 2 phones sold last quarter in the country was an iPhone.

And more surprisingly, Samsung wasn’t the runner-up, with Sharp actually getting the second place with a share of 12.4 percent. Kyocera was third, followed by Samsung with just 6.8 percent of the sales.

The mobile market in Japan reached 11.4 million phones last quarter, and this represents a 10.6 percent year on year growth for the entire industry. Apple sold over 6 million iPhones.