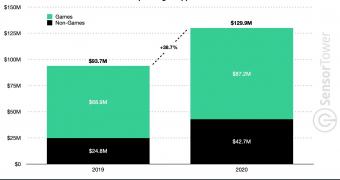 We’ve known for a while that iPhone users typically spend more money on apps in the App Store than those committed to the Android world, and new data shared by Sensor Tower shows the trends haven’t changed during this crazy year.

More specifically, it’s estimated users spent no less than $407.6 million on apps in the App Store and Google Play Store in November, and this is an increase of no less than 34.5 percent from the previous year.

Needless to say, Christmas brought quite an increase, as it alone accounts for no less than 4.5 percent of the month’s total spending. Between December 1 and December 27, mobile users spent no less than $9 billion, bringing the total figure for the year to over $100 billion.

That’s right, users out there spent over $100 billion on apps and games published in the two stores, and this is quite a record given how crazy 2020 has been.