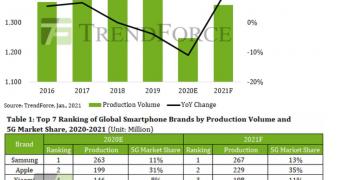 Huawei had a hard time dealing with all the sanctions imposed by the Trump administration, and the company’s smartphone business obviously struggled given the lack of licensed Android and Google services.

The decline is likely to continue this year, according to a forecast from TrendForce, with the company to fall from third place in global rankings to the seventh position.

And it’s all because the restrictions announced in the United States would continue to affect its business, making it harder and harder to compete with the rest of the brands out there.

TrendForce says the mobile market would reach 1.36 billion units this year, an increase of 9 percent, with the first six companies to be Samsung, Apple, Xiaomi, OPPO, Vivo, and Transsion, and they will account for a combined share of 80 percent worldwide.

“Regarding the annual global ranking of smartpho… (read more)