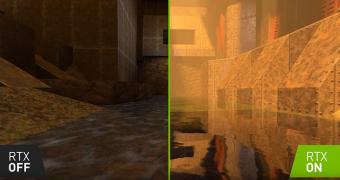 NVIDIA has rolled out a new GeForce graphics driver compatible with several of its GPU models, namely version 460.89, which is the Game Ready release for the Quake II RTX v1.4.0 update that implements support for the new Vulkan Ray Tracing extensions.

Therefore, all GPU models that support the Vulkan Ray Tracing technology can experience Quake II RTX in all its path-traced glory on both desktop and notebook system configurations running under Microsoft’s 64-bit variant of Windows 7, 8, 8.1, and 10 operating systems.

However, the current update might still encounter problems such as desktop flickering (GeForce GTX 1080 Ti), stuttering and lagging upon launching a game, incorrect black levels, and other known issues as highlighted in the release notes below.

In terms of installation, even though the available packages are the same executables targeted at Windows 7, 8, 8.1, and 10 operating systems, both desktops or notebooks, don’t forget there are two separate file… (read more)