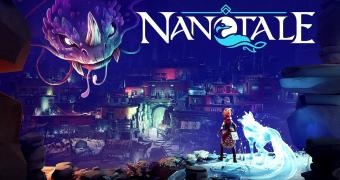 Three quick words take out a fast enemy that wants to ram me. After I deal with his companions another three words allow me to push a sheep out of the way and access another area. One word gives me the health I lost during the battle. Another one fills up my magic. Two of them give me a deeper understanding of a flower. Another delivers enough experience to gain a bonus to my health and an ability to slow enemies.

Nanotale – Typing Chronicles is published by Fishing Cactus, with the same company handling publishing alongside PID Publishing and 2PGames. It is offered only on the PC via Steam, Stadia, and GOG and announces itself as a spiritual successor to Epistory.

The core mechanic is good, old-fashioned keyboard-powered typing. The world is filled with words and players will interact with it by clicking keys to spell them out. Water plants will burst and make vegetation grow. The player can knock back enemies and take down their health. The main character will le… (read more)