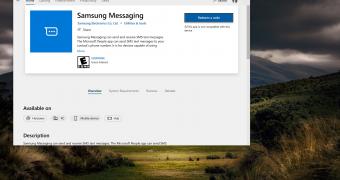 Samsung users can already send and receive messages from a Windows 10 PC using Microsoft’s Your Phone app if the device is supported, but as it turns out, the South Korean company might be working on a new way to make the whole thing much simpler.

It’s a new Samsung Messaging app that has recently appeared in the Microsoft Store, with the description suggesting that users of Samsung PCs running Windows 10 would be allowed to send and receive texts right from their desktops.

“Samsung Messaging can send and receive SMS text messages. The Microsoft People app can send SMS text messages to your contact’s phone number. It is for devices capable of using mobile data (5G and 4G LTE). Only some Samsung models can run apps,” the description of the app reads.

The application lists the following models as currently supported:

No other information has been prov… (read more)