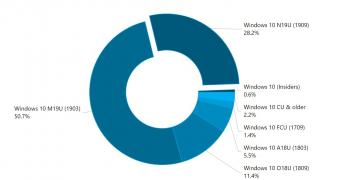 Statistics provided by AdDuplex show that currently the number one Windows 10 version is the May 2019 Update, or version 1903, which is powering 50.7% of all Windows 10 PCs out there.

The November 2019 Update, or version 1909, is improving every month, but this doesn’t necessarily mean it can take over version 1903 before a new release comes out. Microsoft is expected to ship Windows 10 version 2004 in the spring of this year, most likely in April or May, and given the difference between these latest two feature updates, there’s a good chance more time is needed for a switch of places.

“November 2019 Update has grown at a steady pace over the last few months,” AdDuplex explains.

“One interesting tidbit is that usage … (read more)

Thermaltake’s Constellation of Gaming Peripherals with RGB Glitz at CES