A few years ago, Microsoft started developing a simplified and locked-down version of Windows called “Windows Lite” for budget devices. Windows 10X (originally known as ‘Lite OS’) is still on track to debut early next year on mid-range devices from Microsoft’s partners.

Windows 10X is based on Windows Core OS and it will feature a static app launcher in place of the iconic Start Menu. It would be Microsoft’s first operating system that will drop support for Start Menu, which means you cannot view live weather, events, etc on the new ‘app launcher’.

The Windows Core OS-based modular OS will also ditch Microsoft’s monochromatic designs for colourful icons, buttons, and more. It will bring back rounded corners or soft curves, and Microsoft will optimize the OS for budget devices which may only have 4GB of RAM, but it’ll initially ship on devices with more memory.

Windows 10X is still on track to hit the RTM status in the coming weeks and it’ll be then deemed ready for the manufacturers. Microsoft is also working with vendors for Windows 10X-optimized ‘universal Windows drivers’, but there’ll be no structural changes to the drivers. 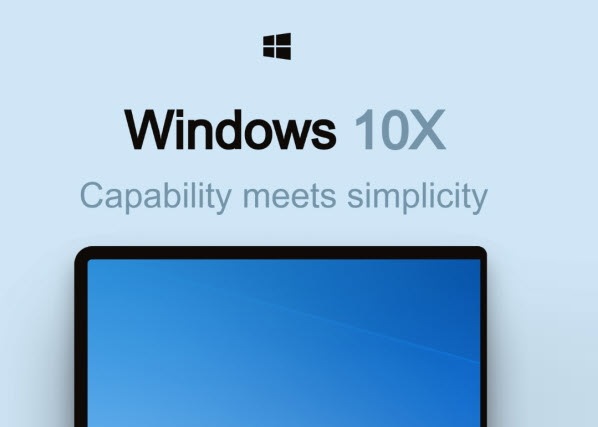 Only single-screen experiences will be offered initially and “mid-range” devices will begin shipping in Spring of 2021 without native support for Win32 desktop apps.

Microsoft will allow advanced users or businesses to access their favourite desktop apps using an internet-based technology called ‘Cloud PC‘, which will sync with Office 365.

Microsoft sources have clarified that the tech giant won’t allow users to install this operating system on their existing devices. Much like Windows 10 on ARM, Chrome OS or iOS, Windows 10X will ship with new devices only. Of course, you’ll be able to deploy it ‘unofficially’ by manually creating a bootable image.

Internally, Windows 10X is being positioned as a direct rival to Chrome OS and Microsoft will be targeting the education sector.