Microsoft Word for Windows 10 is now getting a bit smarter with a grammar checker called ‘Microsoft Editor’. This feature has been available on the web version of Word for some time now, but it’s now coming to Word desktop app for Windows 10, with access initially rolling out to those in the Insider program.

For those unaware, Microsoft Editor uses AI and machine learning to instantly spot typing and grammar errors as you type in products like Outlook and Word. After the update, you can open your documents in Microsoft Word and the free editing tool will help fix any grammatical errors.

Unlike the existing typo fixer in Word, Microsoft Editor uses AI to take things to the next level by checking all elements of your writing and then displaying suggestions to help you with the format, acronyms, inclusiveness, geopolitical references, and more. 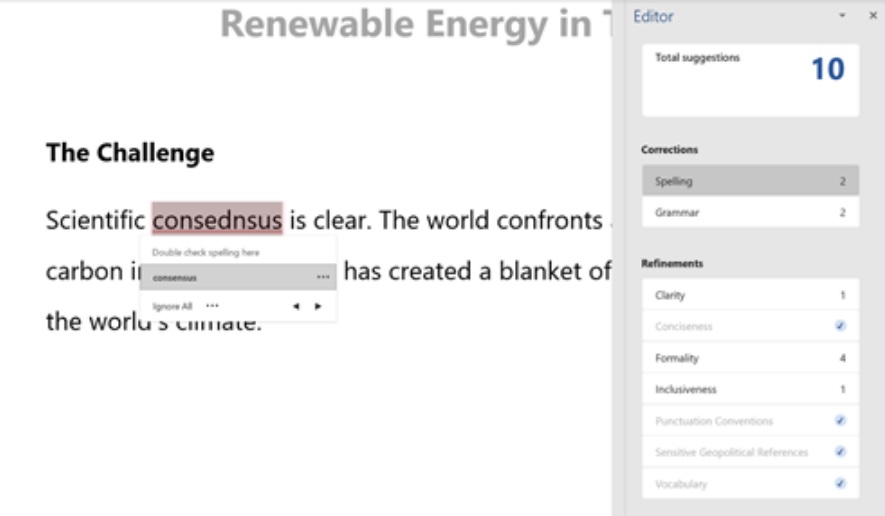 In the desktop app, you can also highlight sentences to access ‘suggestions’ curated by Microsoft’s AI. Based on the suggestions, you can make appropriate changes to the sentence or rewritten completely.

You can also select a word and then press Shift+F10 or Alt+Down to access the suggestions screen, as shown in the above screenshot.

There’s even a plagiarism checker to ensure citations are properly included.

Other features of the new AI-powered for Microsoft Word:

As we mentioned above, Microsoft Editor is currently available for select testers running Version 2010 (Build 13328.20000).

In addition to Microsoft Word, the more advanced ‘left-click suggestions experience’ is also rolling out to Outlook for Windows in the beta channels.

Galaxy Quest 2: Tim Allen Gives An Update On The Script