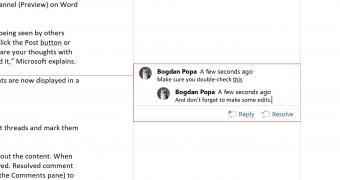 One of the most important features that Microsoft has been working on lately for Microsoft Word is a modern comment experience.

The software giant has previously released these modern comments as a preview, and earlier this week, it announced that after going live on mobile and web versions of Word, the feature is now live in the production channel for Windows too. It has also been promoted to Current Channel (Preview) on Word for Mac.

“With modern comments, you no longer have to worry about your comments being seen by others before you’re finished editing them. After you draft a new comment or reply, click the Post button or use the keyboard shortcut Ctrl+Enter (Windows) or Cmd + Enter (MacOS) to share your thoughts with others. Now, a comment or reply can only be edited by the person who created it,” Microsoft explains.

Microsoft has made working with comments as simple as possible. All comments are now displayed in a dedicated panel showing up to the right of t… (read more)