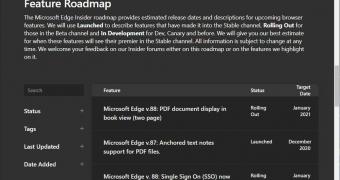 Microsoft is putting a lot of effort into getting Microsoft Edge right regardless of the platform, but at the same time, the company also wants everyone to be fully aware of the improvements it bundled with the new builds it receives.

So the software giant has now announced a new What’s Next page for insiders, all with the purpose of letting everybody know what’s coming to the browser.

“About a year ago we did one of our quarterly surveys and on it was a question asking what changes you would like to see on the Microsoft Edge Insider forums. The top two answers were better release notes and a roadmap of features coming soon to the browser. We have been working on improving the release notes and will continue to investigate changes that we can make to be more immediate and descriptive. For the roadmap, we are happy to announce that in addition to the Enterprise focused roadmap we have revamped the What’s Next page on our insider website,” Microsoft says.