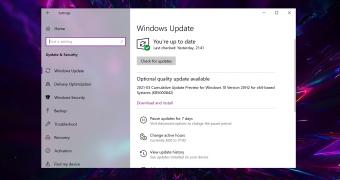 Microsoft is getting ready to roll out new Windows 10 cumulative updates for all versions of the operating system still receiving security updates.

The rollout would take place as part of the April 2021 Patch Tuesday cycle and will, of course, be focused on security improvements aimed at the vulnerabilities found in the operating system.

Needless to say, these cumulative updates should be installed as soon as possible by all users, though as we learned the hard way, doing this is sometimes not the best idea, as they could come with various issues that Microsoft wasn’t aware of in the beginning.

The April 2021 Patch Tuesday cycle will also bring additional improvements for Insider builds, and this time, the rollout is particularly important because Microsoft is getting ready to release another feature update for Windows 10.