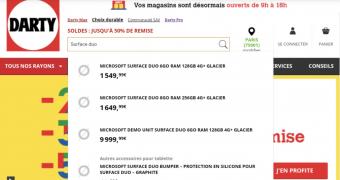 Microsoft is expected to launch the Surface Duo in Europe in the first months of this year, and while no other specifics have been provided, it’s believed the unveiling is imminent now.

French retailer Darty has listed two different versions of the Surface Duo, along with the original bumper, though right now, it looks like the product is yet to go live on the official website.

But according to a post on reddit, in addition to suggesting that the launch of the Surface Duo in Europe is just around the corner, this listing also indicates an 8GB RAM version is coming too.

The French retailer indicates the Old Continent would get the following two versions of Microsoft Surface Duo: