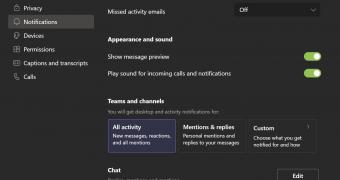 Microsoft Teams is a service whose usage skyrocketed last year for obvious reasons, with more than 115 million daily active users connecting to the service, according to the latest stats.

The Redmond-based software giant has promised to release several important new features for Microsoft Teams, and one of them is support for Windows 10 notifications.

In other words, Microsoft Teams would feature native Windows 10 notifications, and the feature has been in testing since December.

But according to OnMSFT, Microsoft has now started the public rollout of Windows 10 notifications in Microsoft Teams, though right now, it appears the whole thing is happening gradually for users across the world.

On my device, on the other hand, the native Windows 10 notifications aren’t yet live.

In case you’re wondering why this… (read more)