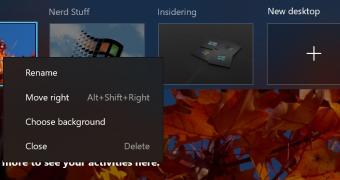 Microsoft has just released a new Windows 10 Insider Preview build for testers in the Dev channel. The new OS build is 21337, and it includes several notable changes, including a new way to reorder and customize virtual desktops.

Windows 10 makes a big deal out of virtual desktops, as this feature allows users to organize and manage their work in a much more effective way.

Starting with this new build, users can order and customize the backgrounds for each virtual desktop, a feature that has long been among the top requests in the Feedback Hub.

“Virtual Desktops help you cognitively separate different tasks on your PC, including helping to create work-life separation. They can be swapped into view, letting you shift your work from one desktop to another. Instead of juggling multiple windows, you can switch between Virtual Desktops to multitask,” Microsoft explains.