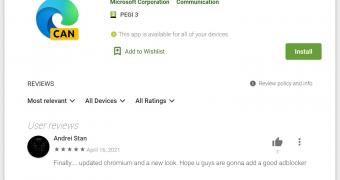 Microsoft’s Edge browser is already available on Android and iPhone, and now Microsoft is making another step towards turning it into one of the leading apps in this software category by releasing its developer channels on Google’s platform as well.

In other words, users can download preview builds of Microsoft Edge even on Android, as the Canary version has been published on the Google Play Store.

Needless to say, Canary builds aren’t recommended for production devices, but they do come in handy whenever you want to try out new features in advance.

Worth knowing, however, is that Edge Canary comes with an increased likelihood of bugs, with updates released on a daily basis for testing purposes.

“Want to be one of the first to preview what’s new? The Microsoft Edge preview channels are now available for mobile! This is the Microsoft Edge Canary channel for Android. Canary will be released … (read more)